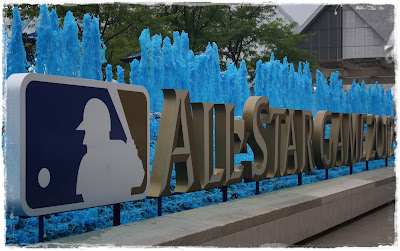 Baseball fever has hit my home town. The MLB's All Star Game will be played here in Kansas City, MO tonight. American League fans and National League fans are sure to agree on one thing, it is bound to be an exciting event!

We, however, did not spend the $250 per ticket to go to the game. We will be watching The Boy play baseball instead. And DVR'ing the game to watch later.

Getting in on some of the excitement, The Boy and I had a mommy/son afternoon and did go to FanFest. {Those tickets cost as much as or more than tickets to a Royals game!} FanFest was a hoping place. Lots of people, lots of vendors, and lots of activities. 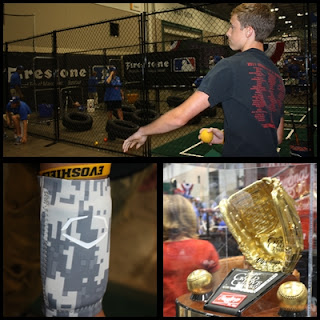 The first stop for us...free Taco Bell Dorrito's Locos. Then The Boy found free G2 (Gatorade). Most of the activities were geared at kids younger than The Boy or maybe The Boy is just too self conscious to participate?  They had a small field set up where kids could have their own home run derby contest. I did con The Boy into throwing baseball's into tires. He pretty much nailed it. But no amount of coaxing could get him to wait in line to have a trading card made.

What was he interested in? He had one thing on his mind and one thing only. Evoshield. My sons newest love is not a girl. It is Evoshield. What is Evoshield? It is a company that makes protective wear for sports. The Boy has an elbow guard, a chin guard, and a wrist guard. The Husband likes to joke that The Boy has a baseball suite of armour. And it kinda is. Each product comes with a pouch of chemicals. Once you expose it to air, you mold it to your body and it creates a hard as can be layer that protects your body from fast balls. The Boy was hoping to score a new pair of baseball gloves from Evoshield. However, he learned that MLB has a contract with Franklin for batting gloves and Evoshield could not sell them at FanFest. He was pretty bummed. Instead he coaxed me into buying another wrist guard in the new digital camo print 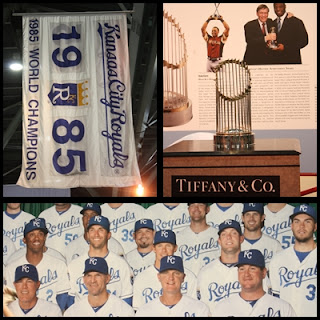 We saw a Golden Glove. We saw a World Series Trophy as well as a Home Run Derby, and MVP trophies. Did you know that Tiffany and Company makes them? I wonder if they come with a pretty blue box? There were autograph sessions...but they were retired players that my son had never heard of before.

After we were finished at FanFest, we walked around outside. There was music playing and one of the prettiest fountains in KC. 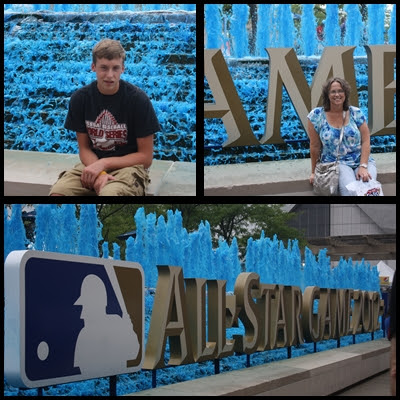 Enjoy the game tonight. Share in our spotlight! The Boy already noticed that there is a crown cut into the grass at Kauffman Stadium.  He also loves the Pepsi can that is a box suite. What was your favorite thing?