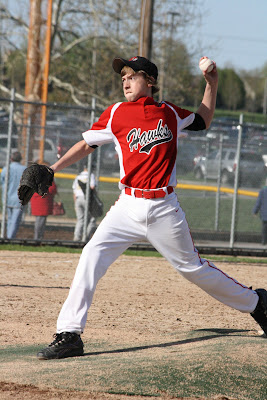 The Boy and his Team are playing in a baseball tournament in Kansas this weekend. I say that like Kansas is so far away, and it is not. The weather was very suspect all morning. Rainy. Cold. Windy. Thankfully, the organizers of the tournament pushed the start times back and while it was still chilly, we got to play some good ball today.

Our second game started around five with The Boy on the Mound pitching. He pitched the last inning of the first game and did very well, so his confidence was soaring high as we started the second game. First inning our team went up 5 to 1. I think I might have seen the other teams confidence crack as we scored those five runs in the first. But if I did, it was momentarily because they came back and nearly evened that score 5 to 4. Shortly there after, they capitalized on the momentum switch and took that score all the way up to 11 to 5. Their third baseman fielded anything near him and effectively shut our team down. Our boys confidence did crack. You could see the frustration taking over.

Then maybe we caught a break? They batted out of turn, we got the elusive third out on a technicality?!?! It must be a sign, right? Well maybe not so quick, first batter hits a nice strong line drive to THIRD base. Of course, he caught it. First Out. Then it is The Boys turn, and really he struggled with the bat today. I am chewing on my nails. He got a hit, a bouncy ground ball, but he was thrown out at first. Two outs, and a HUGE deficit in the score. I literally said to my ex-husband what are the odds we are going to score enough runs with two outs. His wife actually shakes her head and says, stranger things have happened.

I do not recall the progression of hits, but I will tell you we got the bases loaded! Then we got another hit and a few RBI's. Then another hit and a few more RBI's. Before we knew it, the tying runner is on first. He advanced to second. Then to third. Base hit scored him. Holy Cow, we were in the final inning, last at bat, two outs, and had tied the score! We have nearly made it through our batting order with two outs looming over our heads.

We are walking into the final day of the tournament in seeded second. One game between us and the championship game.

After we got home from the game, I attempted to call my mom and tell her this story. I was so tired, all I could say was Amazing Game! I fell asleep in the living room immediately after her phone call. The husband woke me and told me to go to bed. When was the last time I was in bed at 8:30? Well, now that I am up at 4:00 a.m. maybe there is a reason I do not go to bed that early. So, dear Momma, this is The Boy's baseball story for the day. Here are some photos of him playing baseball. I am functioning MUCH better than when I called you.

Let's hope tomorrow is a great day of baseball too!