By Pamela April 03, 2011
Camaraderie: Mutual trust or friendship among people who spend a lot of time together.
The 2011 Spring Clash Baseball Tournament has come to an end. We ended up going 0-3, but I honestly don't think that record reflects how well our team of boys played. We played the number 1 seeded team today and held them to 9 runs and lost by 3. My number 23 got his first "hit" today and had a perfect on base percentage in today's game. The bad news, he has been nursing a sore elbow all weekend and has not been able to pitch.
Yesterday, the Short Chic went with me to the games as my husband was still out of town fishing. I packed up a snack pack to keep her entertained with. I also made lots of "extra" because I am use to the players having younger brothers and sisters. Since we are new to this team, I am not sure what to expect, but there was only one younger sibling at the game beside my Short Chic.

I think the Short Chic's big brother enjoyed more snacks that anyone. We arrived at 1:00 for a 2:00 o'clock game that did not get started till 2:41. Then we went two extra innings because we were tied. Unfortunately, we ended up losing by 1 point. By the time his game was over, he was starving! 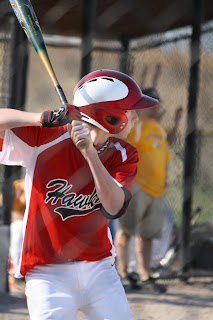 This is the pitch that The Boy actually got a hit off. Unfortunately, the catcher interfered with the swing and Jacob was thrown out at first. BUT, luckily our coaches asked the second umpire for an opinion and YES, he called interference. The Boy got to take his place, safely on first! We went on to rally and tie the score, that led us into extra innings. Unfortunately, I took a tight photo and missed the interference. 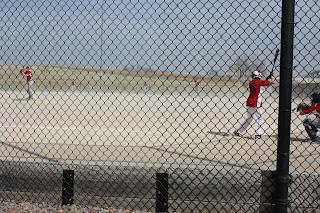 Today's game, can be summed up in one word: W I N D Y! I did not even chance changing my lens for the high risk of getting dust in my camera. So I attempted to snag a photo of the wind, and this is as good as I got. If you can look past the fence, you can see how cloudy the entire photo looks. That is the dust flying across the field. There were so many hats flying off heads at one point, I thought we would never get a chance to throw a pitch. But the boys adapted. 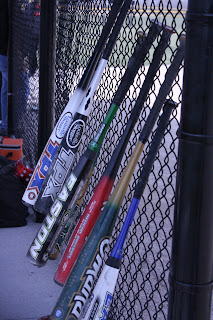 Of course the best thing, in my opinion, about baseball is the camaraderie. It exist between players, between coaches, players and coaches, between parents, and even between siblings. We may not have won a game this weekend, but I am walking away feeling good. I have not seen my baseball family since the end of the season party last year, a week after my diagnosis. Last year when I said good bye to everyone for the winter, I was scared out of my mind about the fight of my life. This weekend, I feel strong and confident.