By Pamela May 30, 2014
Memorial Day Weekend was our big kickoff to biking the Katy Trail. The Katy Trail is a rail-trail that has been built on the former Missouri-Kansas-Texas Railroad (MKT or Katy). It is 240 miles long and runs from Clinton, Missouri to Machens, Missouri.


My family made it a goal to bike this trail in 2014. We are not experienced bike riders so we knew that we would not be riding end to end. We set about with a smaller, hopefully more attainable goals. The first goal was to bike from Sedalia, MO to Clinton, MO ( a mere 37.5 miles). 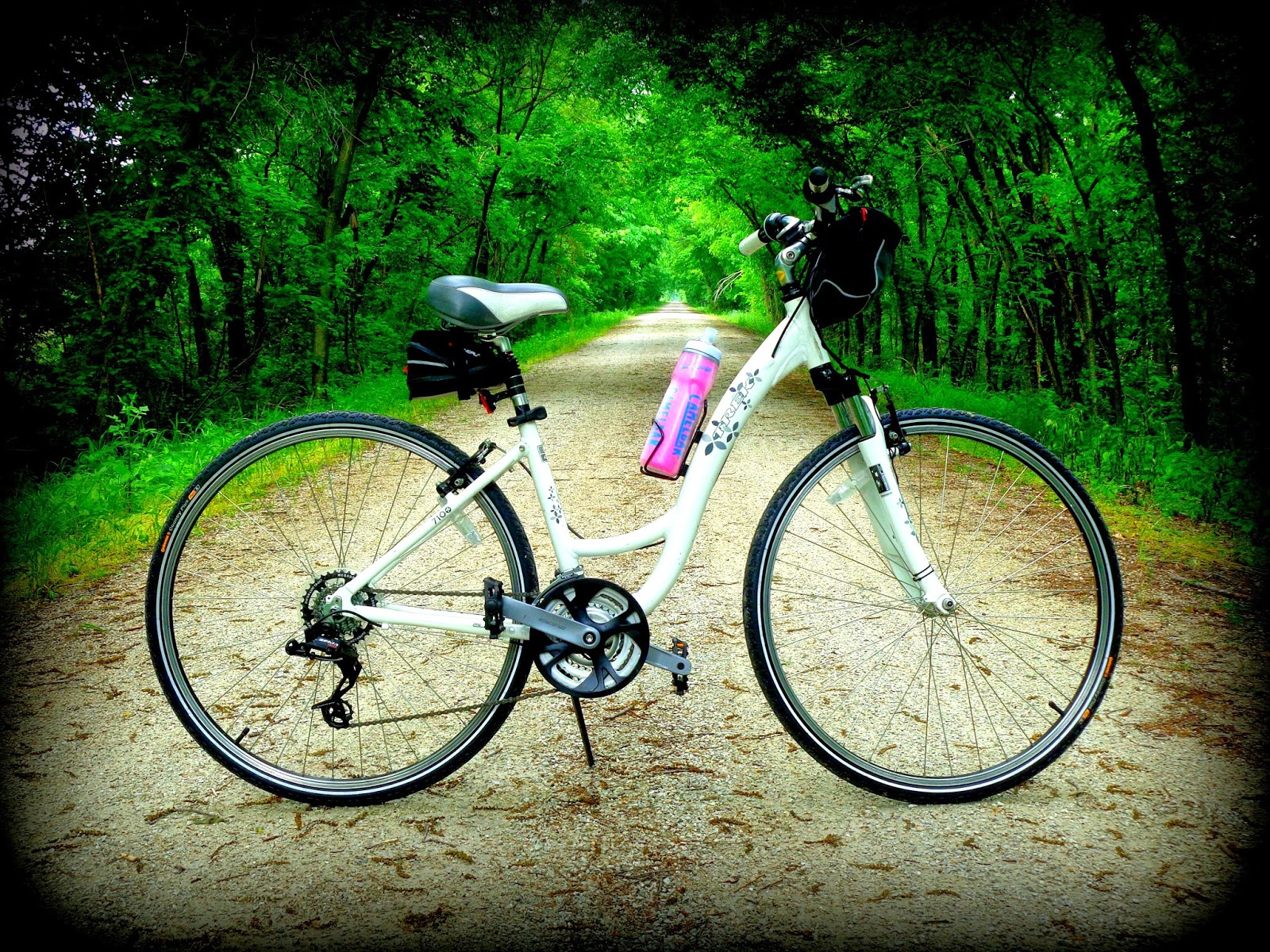 We developed our plan and our back up plans and headed off. We decided to use a family member as a support car (someone who can drop us off, pick us up, and supervise The Short Chic while we were off biking).  Our Plan A was to make it all 37.5 miles in one day. Plan B was to bike take two days and bike from Sedalia to Windsor, MO (20.9 miles) and then Windsor to Clinton (16 miles) another.

As we woke up early on Saturday, May 24 to head out we noticed dark grey skies above us. We checked the radar and discovered in fact the rain that had been eluding us all week had found us and was about to come crashing down. The Husband put a halt to our biking adventures as he knew that if we biked in the rain we would be wet, muddy, and miserable.  So, we called a rain delay and pushed back the ride another day. We did find other cool Missouri things to do but that is another post! 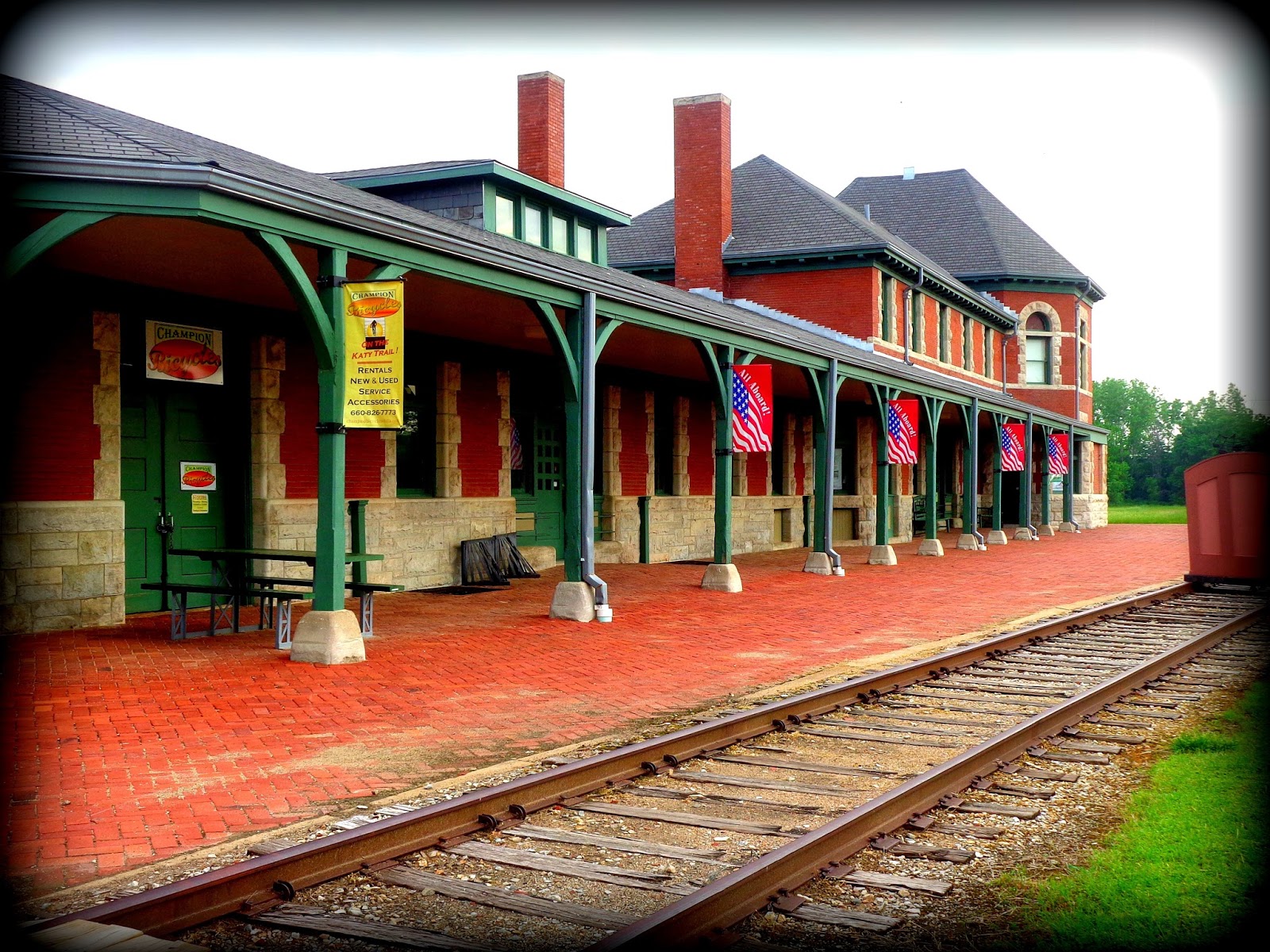 Sunday finally came and I almost felt like a small child waking on Christmas morning.   The day you never thought would arrive had arrived.  We drove from our campsite in Warsaw MO to the trailhead in Sedalia, MO. After last minute checklist items: air in the tires, water in the water bottles, bathroom, and of course pre-ride photos we departed the Sedalia trailhead a little after 8:30 in the morning. I should note that the Sedalia Depot is one the only original depots on the trail. It has been fully restored and from the outside it looks awesome. It was closed when we were there. 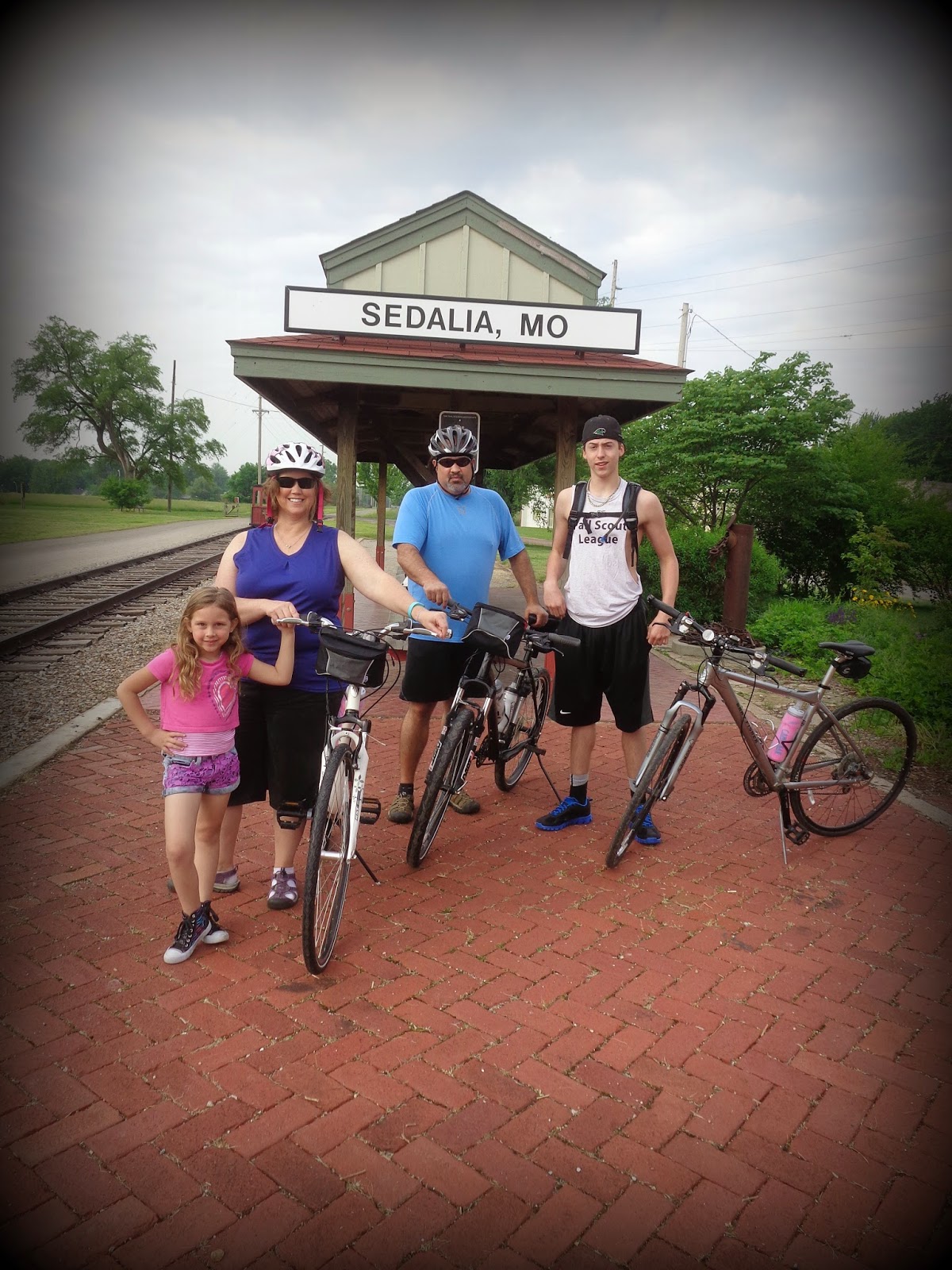 The first leg of our ride (Sedalia to Green Ridge, MO)was 12.2 miles of shaded tree-lined and beautiful trail. Wild onions were in full bloom as was the Honeysuckle plants. The trail smelled so sweet from all the flowers and the fresh rain.  The trail was in good condition and I would say we made good time. We averaged about 8 miles per hour. The overall elevation of the trail is pretty flat but there are variations along the way. There are no hills. We could feel the elevation decreases as we found ourselves biking easier and faster. Then we would find ourselves winded and realize we were going up an incline.  You can't tell the inclines because they are so gradual.

We were so excited to approach the Green Ridge Trailhead. The Boy had already eaten 2 bags of beef jerky, 3 granola bars and was still starving. The Husband's stomach was rumbling so loud at times I thought the MKT Train was back on the line.  With a stop for food in mind, you can imagine our shock when two dogs came up behind The Boy and attacked him. Before I could even catch up to him they had bit him and ran off.  (More of this story later in another post!) 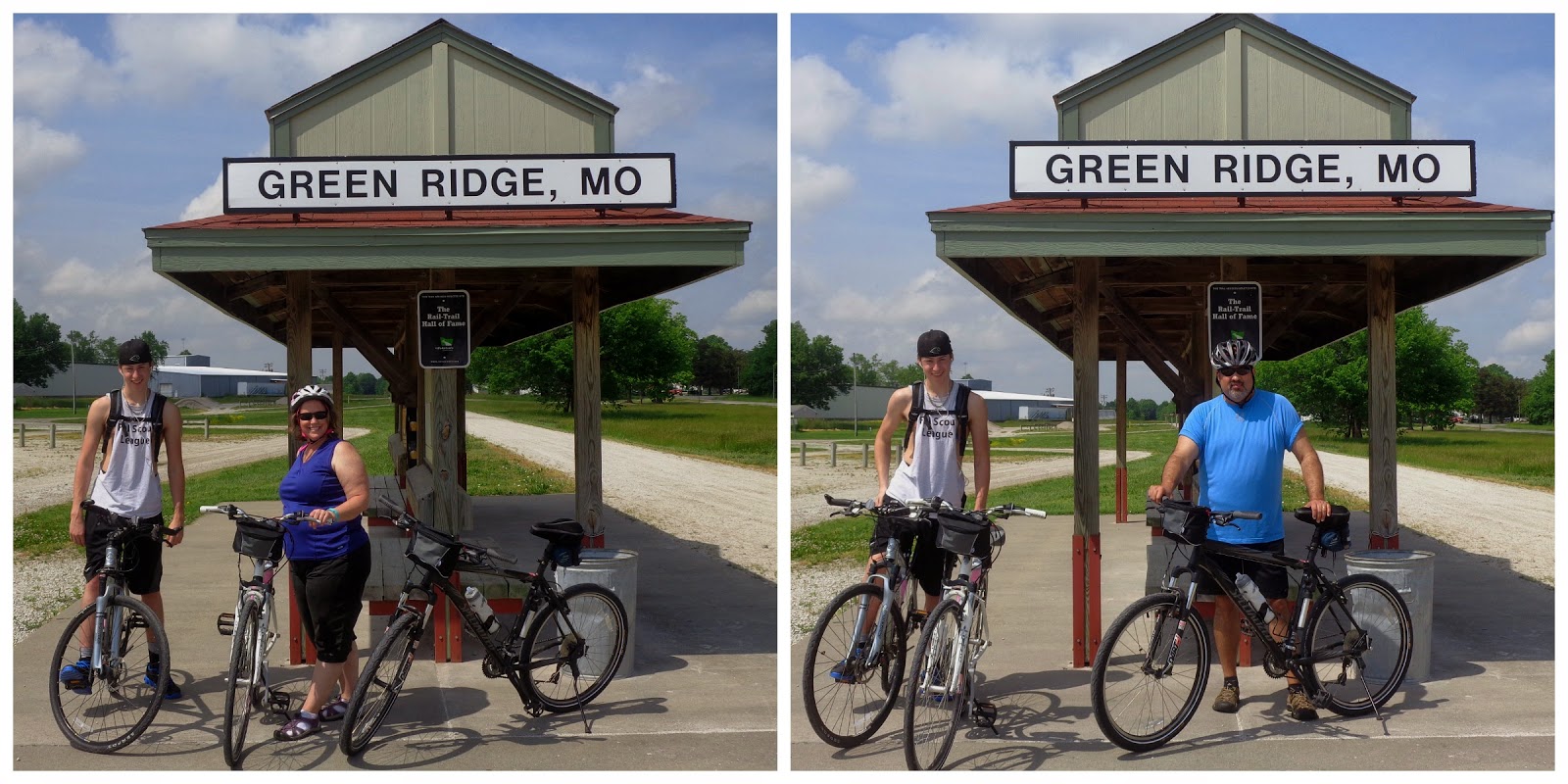 The local Casey's store employees were so nice to us! They filled our water bottles and gave us topical first aide cream and band-aids. We loaded up on some Casey's pizza and lounged out in the town's city park. We inspected the dog bite and determined not to end our ride.  Encouraged by how well the first leg went, we sat off to go the next 8.8 miles to Windsor, MO.

It is amazing how different the trail became on our second leg. The shade was gone. It was mostly sunny and bright. The shade of trees became occasional. Our view became the Prairie Restoration  project the Department of Conservation was growing.It was only 80 degrees out but it felt like a solid 95 that day. The trail also changed. Where it had been firm it was now soft. Our tires sunk into the trail and maneuverability became very difficult.  Our patience was tested. Our capabilities stretched beyond our comfort level. If we would have had cell phone service I am positive a call would have been placed to our support driver to be waiting for us in Windsor. 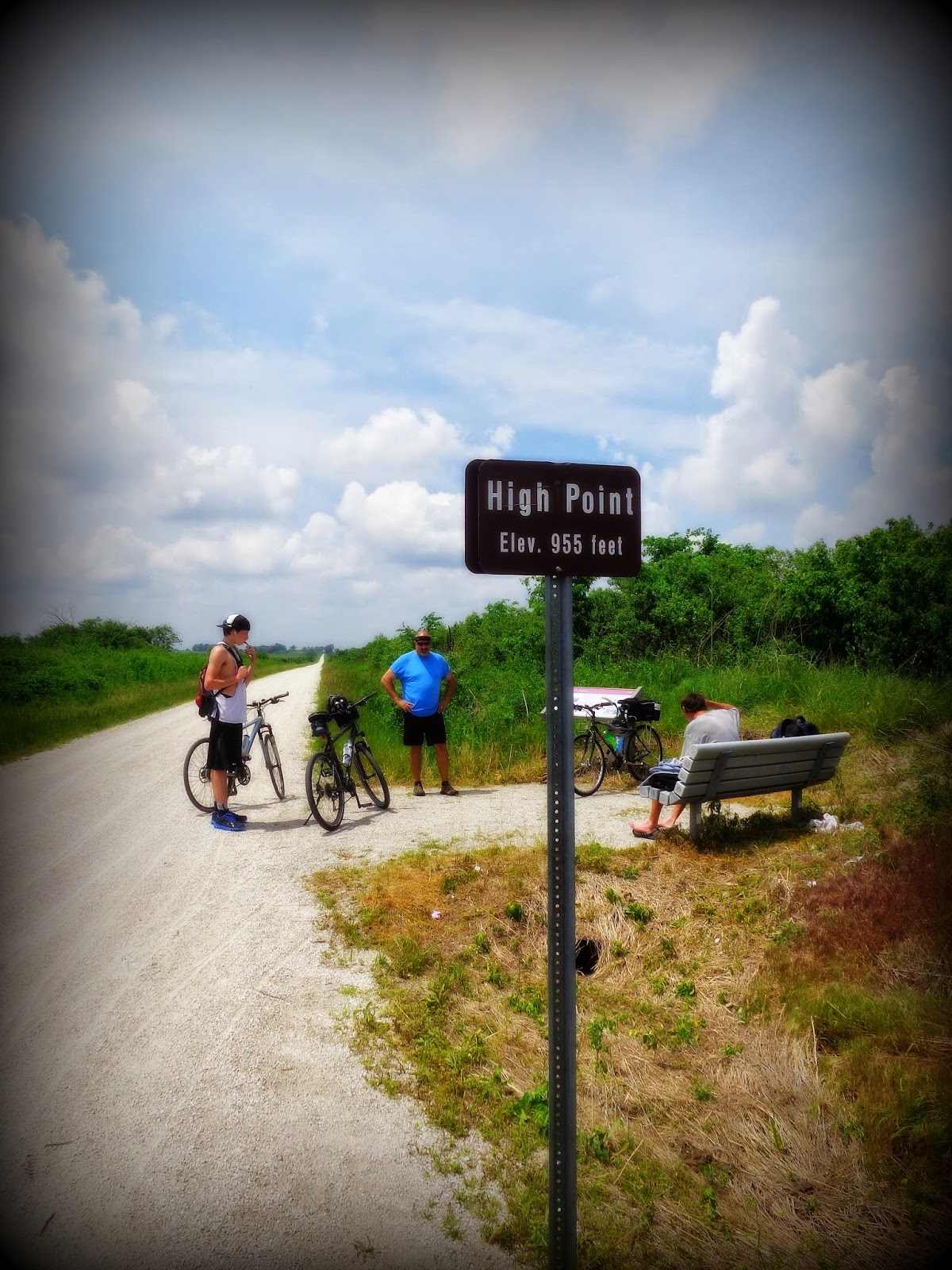 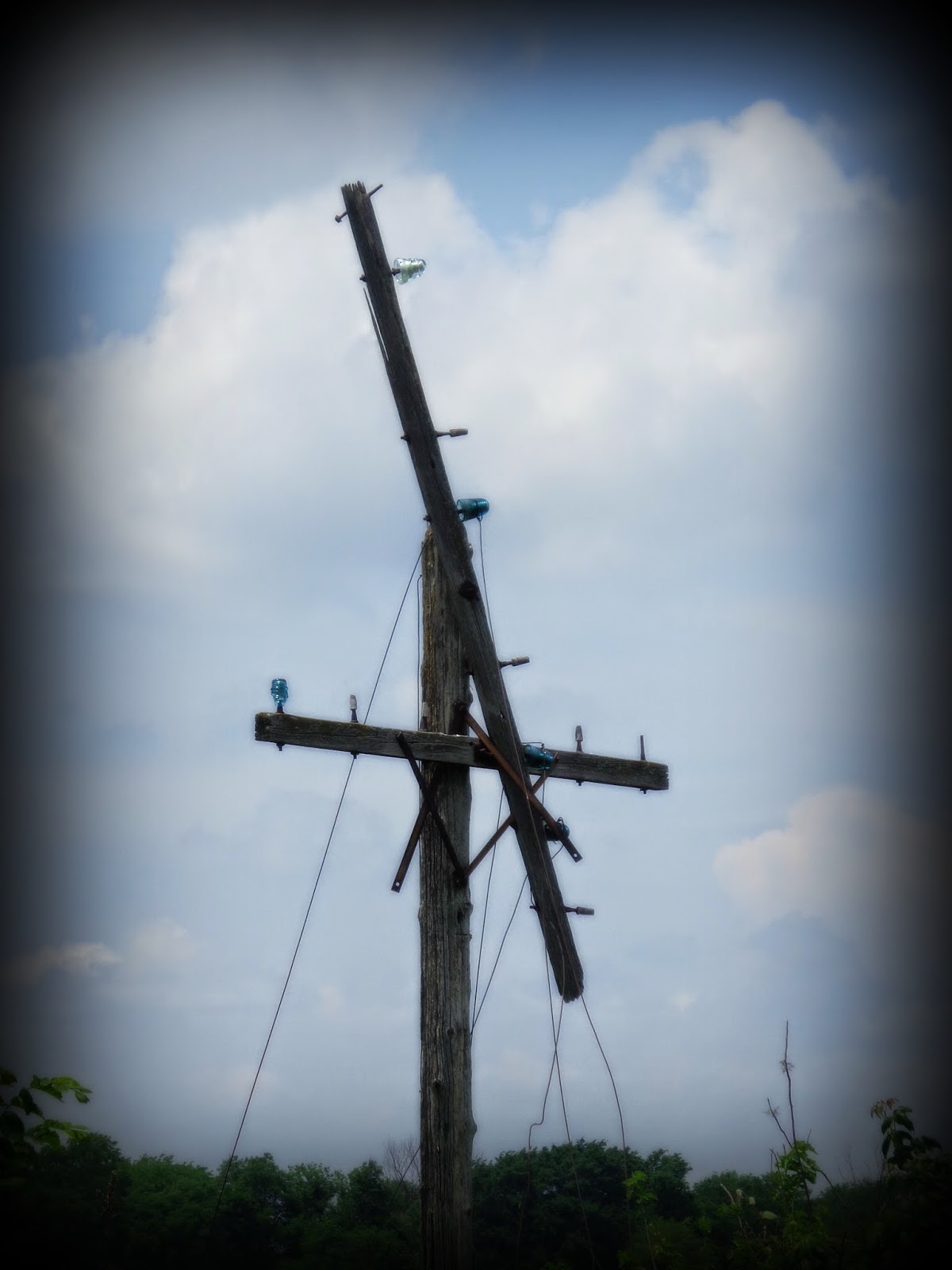 By the time we reached the trailhead in Windsor we all were pretty much finished riding for the day. Since our support car was not waiting for us we hit up the local Casey's. The Boy got more pizza, more jerky, cookies, and water. The rested our tired legs. We even met a man who was traveling by bicyclist from Southern California to Northern California to New York City. He was passing through Missouri and stumbled onto the Katy Trail. We met families out for short rides. We even saw The Boy's middle school health teacher! 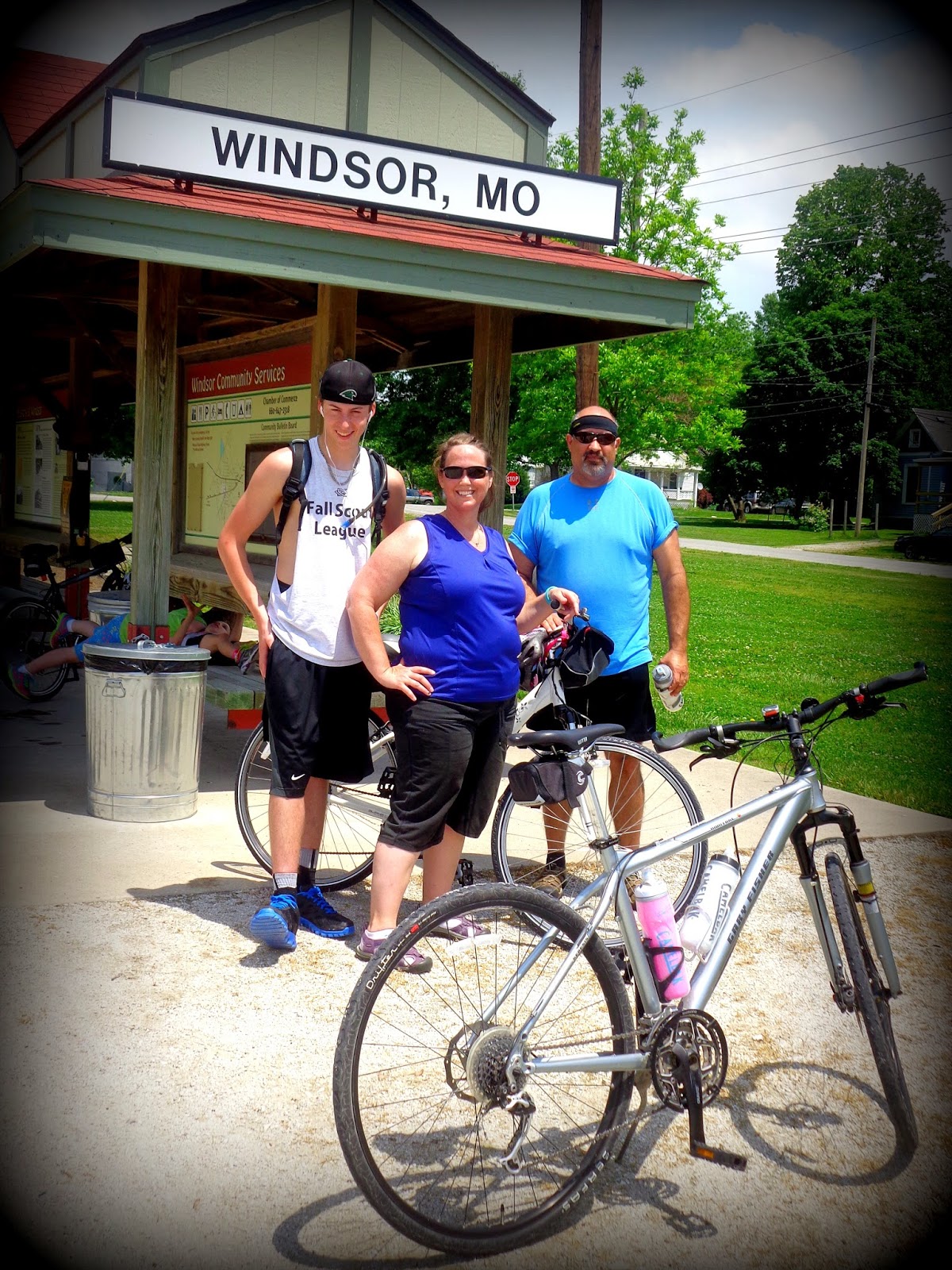 Several people had told us the trail was hard and not soft to the West and we made a decision that we would keep going the next 6 miles to the next trailhead in Calhoun, MO. The trail was better; firmer. We once again had shade. The leg from Windsor to Calhoun was probably our fastest leg of the whole trip. 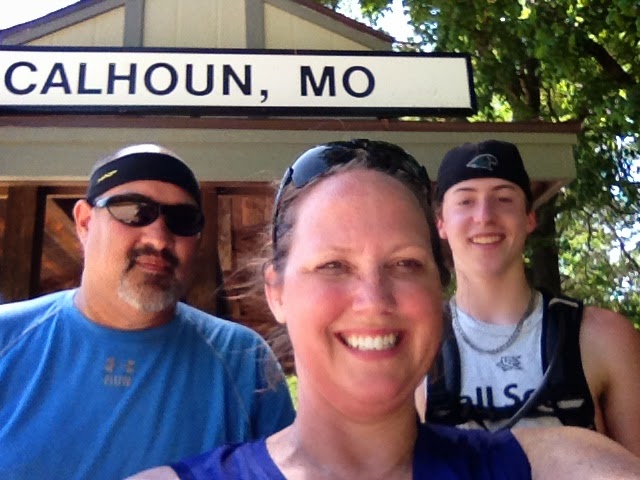 When we reached Calhoun we learned the trailhead was off the trail and up a very steep path. The Husband immediately began having muscle cramps and declared himself finished. We called our support car and told them to find us in Calhoun, MO. We were only 9.4 miles to our destination.


As we sat there recovering and resting, we felt like we had failed. We were not going to reach our destination. The Husband drank some Gateroraid. The Boy pouted that there was no Casey's at this stop. Then we decided we were going to keep trying! We called the support car and told them to pick us up in Clinton, MO and we headed off with only 9.4 miles left to go. 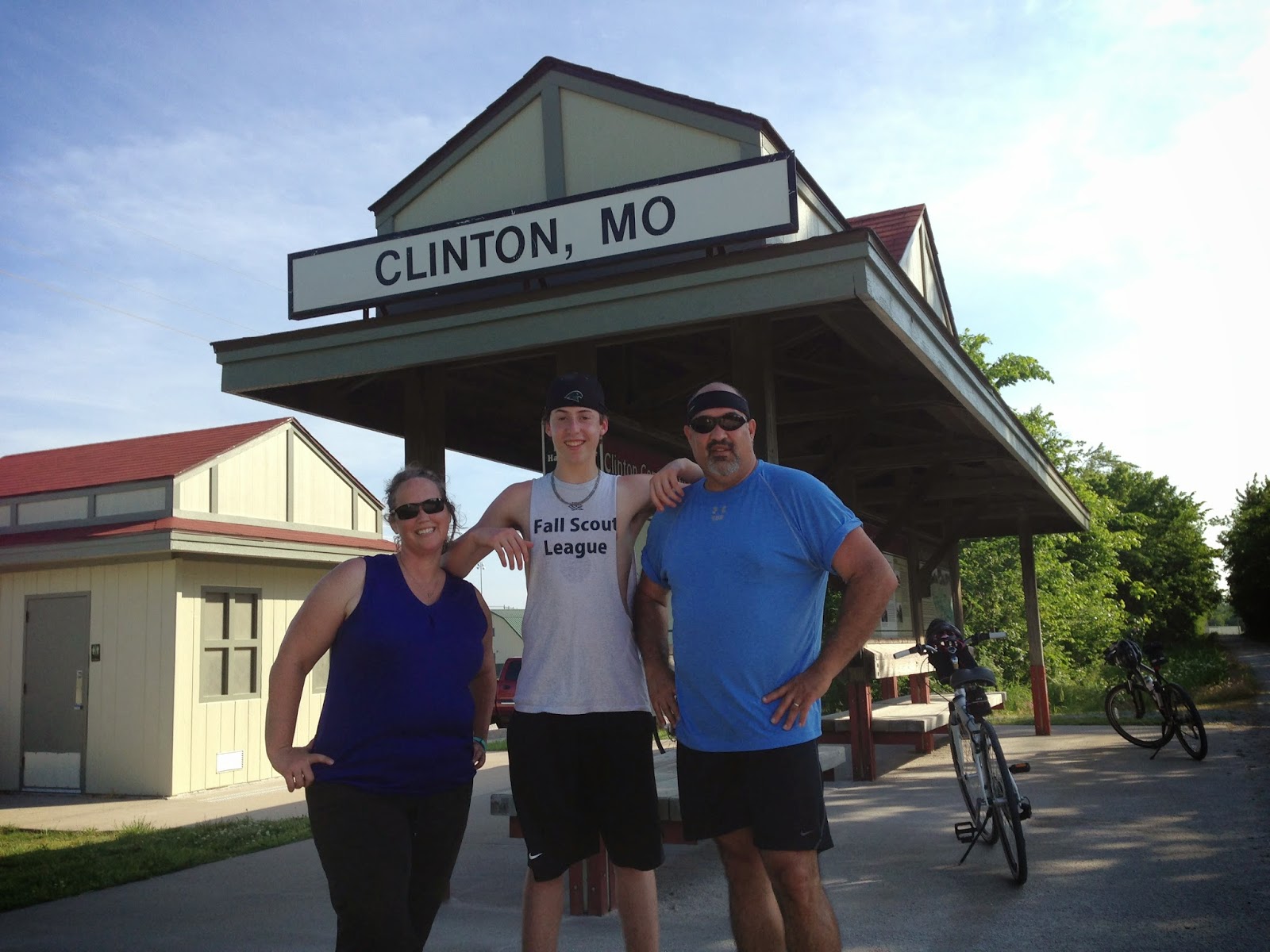 The shade came and went; although a lot of it was mostly full sun exposure. We found ourselves stopping every mile for a water break and talk about how excited we were to be finished. We arrived in Clinton, MO a little after 6:00 p.m. to find my Mother and The Short Chic waiting for us, camera's in hand.

At the conclusion of the day we were exhausted. Every large muscle group ached. My fingers and hands were numb and tingly. We were ready for cold drinks and food. And bed. By the next day, our thighs and legs were sore. Today, the only thing that reminds me that we biked 38.13 miles are four of my fingers (2 on each hand) that are still numb. I am sure I grip the bike wrong, I am sure my bike grips are not made for long rides, and I am sure I just need more conditioning.

We successfully completed our first leg and planning has commenced for our second adventure.  With this ride, I am up to 56 Missouri Miles. I earned several more badges including 25 Cycling Miles, 50 Missouri Miles, The Katy Trail Badge, and a Healthy May badge.