My worry in taking a wide range of kids camping is that the younger kids would be happy just playing together but the older ones, the one's in that awkward pre-teen/teen age, would think everything was so uncool they would just sit around and mope. So I designed a few activities that would hopefully get them up, participating, and moving. 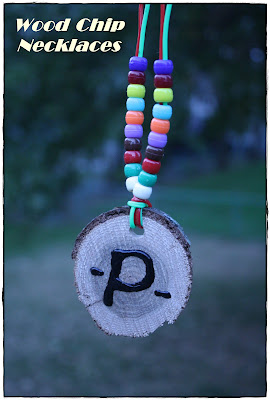 I admit I did some begging. In the end, The Husband borrowed his father's chainsaw and decided to help me cut medallions out of a limb.  His mood started changing, quickly.{I then begged him to let me try my hand at the chainsaw, but he would not let budge on that one. I had to settle for holding the tree limb secure.} 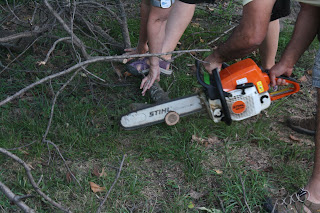 After he/we finished cutting the medallions, I asked him drill holes in the top of the wood. We made 25 medallions that night. 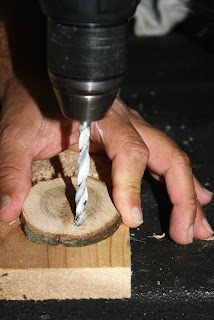 I purchased some inexpensive plastic string and some beads. I had some old fabric paint in my crafting closet.

I saved up my empty milk jugs and put the wood chips in one, divided the beads and put half in one jug and half in another and then did the same with the string. My cousin and I then hid the milk containers in a wooden area near our campsite. We hung some in trees up high and others down low. We hid some in high grass. According to the big kids, we made it way to easy and did not bother to cover our tracks!