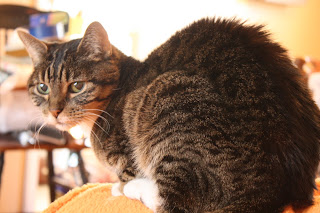 This is my kitty. I named her Miss Emily when I got her in the spring of 1994. Miss Emily  was not her first name. A coworker of mine had never had cats before so she got two. She did not realize how nocturnal cats where. So she planned to give them to a shelter. I could not take both, but I selected her. Her name then was Kitty. Later, after The Boy started Kindergarten, he added a middle name. Her name became Miss Emily Elizabeth. Then my husband came along. He called her McKitty. After The Short Chic came along, she just called her Kitty. I think it is ironic how her name came full circle. 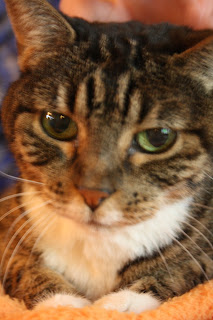 She walked funny because she broke her leg when she was a mere kitten. The vet could not see the break on the x-ray so it was never set. She loved to sleep with me. If I opened a can of tuna she came running. She loved the smell of it. I also let her lick my cereal and ice cream bowls. She also loved to drink water straight from the faucet. 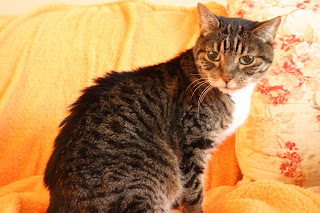 She tolerated two little kids: The Boy and The Short Chic. She did not however appreciate any other little kids. She would hiss at them something fierce. She also did not appreciate dogs. She pretty much hated them.

Miss Emily passed away last night. She would have been 18 years old this March. Her passing was not a surprise. Even though in the past few years she has thinned out, she really started looking ill about three days ago. My Husband told the family yesterday that the end was near. He and I even talked about the worst decision we have had to make as a couple: should we call the Vet to put her to sleep. 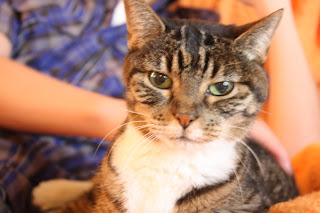 Last night I went to sleep nuggling her and woke up to my husband telling me that she had passed. He stayed up with her. Checked on her every hour.