By Unknown October 20, 2013
The question at this year's Family Camp-Out was: How many ways can you fix a hot dog on a campfire?

We had some fun answering that question! 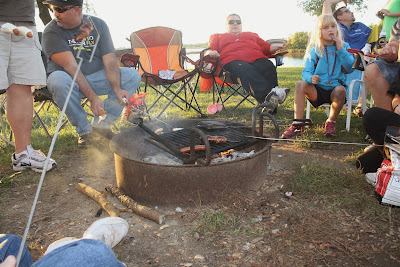 There is absolutely nothing wrong with a hot dog cooked on a stick over a fire. The cooker gets to control how cooked the dog gets. I personally prefer mine with a fine coating of burnt!  This is how my daughter prefers her hot dog with a little ketchup and some chips. She is happy as can be! 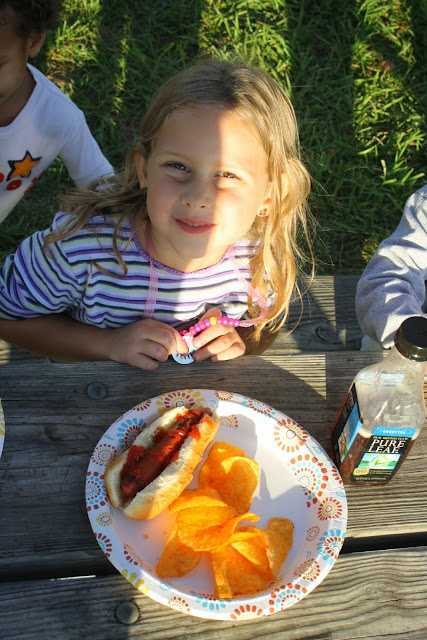 Oh, this was new to us all. We all know corn-dogs are deep fried in oil. But, I wondered, can you cook them on the campfire? We purchased a few of those campfire pie makers and I honestly thought maybe...just maybe you could make corn dogs in them. We used Jiffy Corn Meal Mix, which was easy enough to mix up at the campsite. 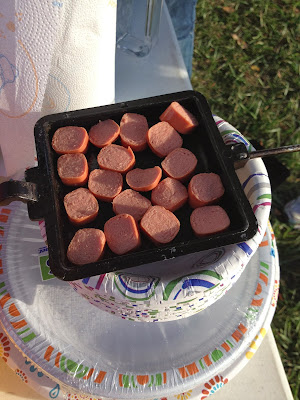 I started by cutting up the hot dog. Then adding the corn meal mix. 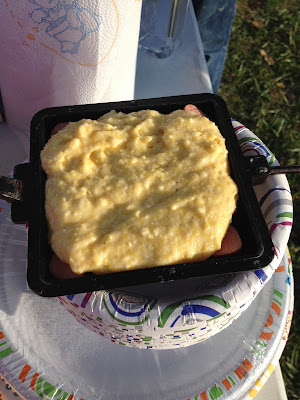 Then we put the pie iron in the fire, or really we used indirect heat.  It cooked perfectly!  Do you have some of these pie irons? They are the best! You can cook breakfast in them. Lunch. Dinner. Even dessert! 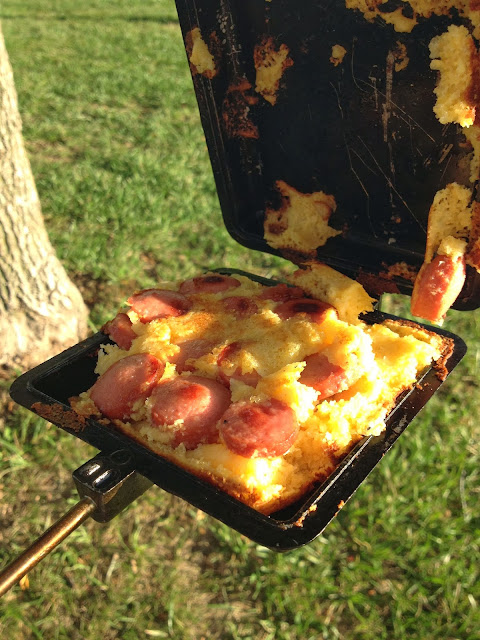 They do not look like a traditional corn dog. But they taste amazing. All the components are there. This is how The Short Chic's BFF likes her hot dogs. She declared that they were the best! 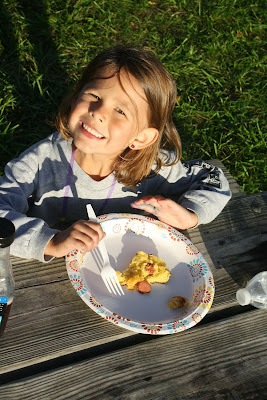 Third: Campfire Pig in a Blanket

The next option is all about taking an American Classic camping. There are variations to this dog and I like them all. I like adding a small slice of cheese to my hot dog before I wrap the biscuit around it.

At the Family Camp-Out we used bread-stick dough instead of biscuits.  Before we wrapped them in dough we sliced the hot dog down the center and added pieces of sliced cheese to the middle. Then wrapped it in bread-stick dough. 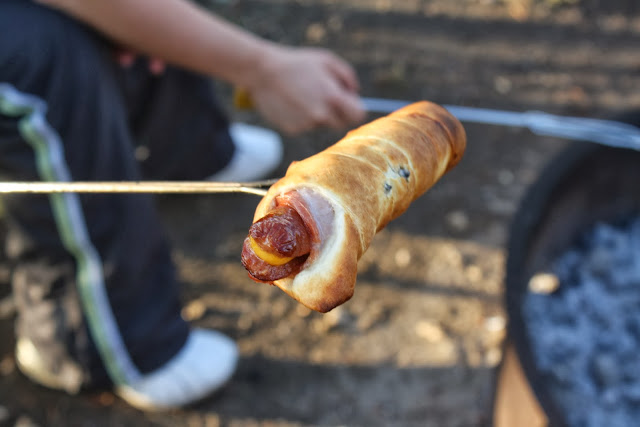 They take a little longer to cook but they are so worth the wait.  We also played with the bread. At our local ALDI store we found canned Bavarian Pretzel dough. I purchased a few cans of them and we also wrapped the hot dogs in Pretzel Bread. 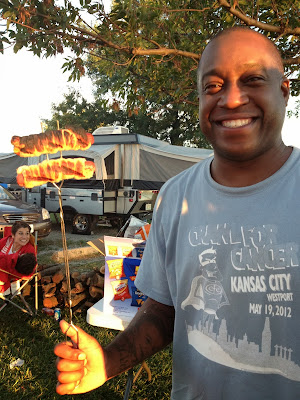 Everyone seemed to love the Camp-Fire Pig in a Blanket!  The good news, you don't even need buns. Which is a good thing because this event planner forgot to put buns on the list of needed items! 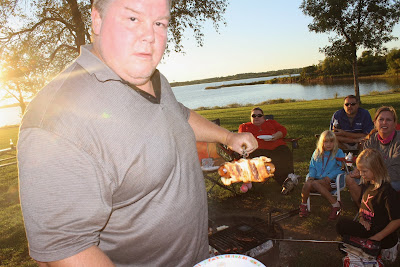 Fourth: Two Pigs In a Blanket!

What! Two pigs in one blanket? Is that possible? Sure it is! And we certainly experimented with that too! To make a Two Pigs In a Blanket you follow the basic premise of a Camp-Fire Pig In A Blanket. Cut the hot dog down the middle, add cheese {or don't if you prefer not to}, then before you wrap the bread-stick around the hot dog add a slice of bacon. Then add the bread. 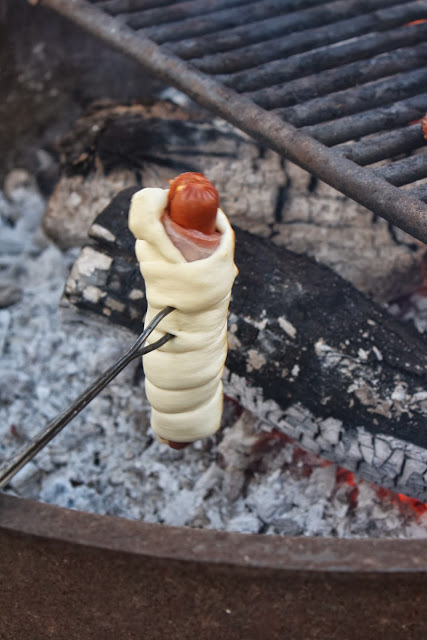 My family loves hot dogs. They even get angry with me when we go camping and I have not put hot dogs on our menu. But, I was not sure if everyone would like them or not so I wanted an alternative just in case someone did not like hot dogs. I selected chili because it could be eaten alone or on top of a hot dog for a chili dog. I made my Mom's famous chili and froze it prior to the camp-out, then I just heated up and served it.  My Momma would be happy to know that I received lots of compliments on her chili! {Maybe one day I will share her recipe with you all? Maybe!}

Five. We found five different ways of serving hot dogs at this year's Family Camp-Out. I would say the hot dogs were a huge hit because the fire was busy for hours. 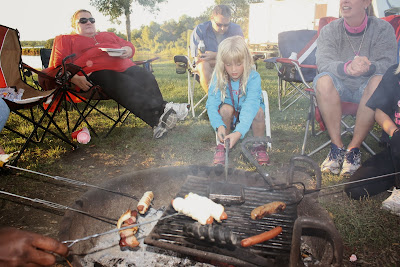 Hot Dogs were not the only food we had at the Camp-Out that is worth mentioning. One of the campers brought his Paint Bucket Drink.  Other than Vodka and Lemonade, I can't seem to recall what went into this drink.  I can tell you it was yummy! 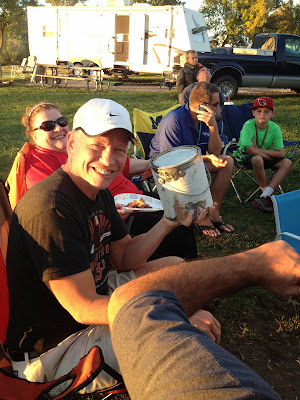 On our final morning, everyone brought their own breakfast burrito's to put on the campfire. I made homemade donuts to tied us over! Campfire Donuts are the easiest thing to make and are so yummy. 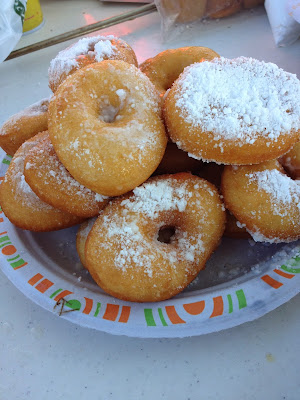 I used a cast iron dutch oven and heated Canola Oil up over the campfire. The donuts are simply the cheapest canned biscuits on the market. I poked a hole in the middle using a straw and then deep fried them in the oil. It really does not take long to cook the donuts, You will probably want to flip them once and then pull them out. I made a simple glaze out of powdered sugar and milk and dipped each donut in the glaze while it was still hot. 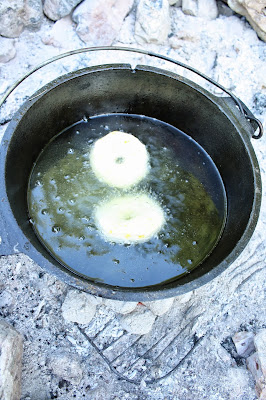 Our Second Annual Family Camp-Out was a success! It was nice to just relax and enjoy each other's company as Autumn makes it's entrance.

Camping, to me, is about unplugging from life. 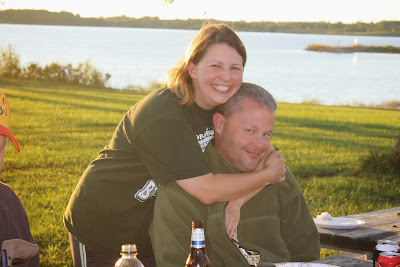 I am so thankful that so many families and people came out to the camp-out this year. We might have dealt with some wind...and rain...but we had a great time doing it. 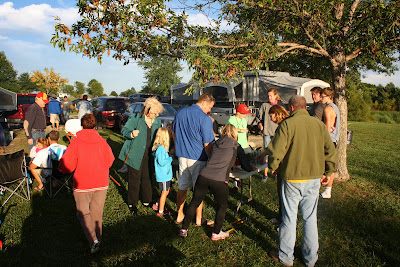 Until next year friends! 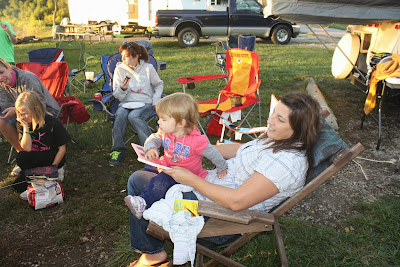 By Unknown August 17, 2014
I have seen a few of these around campsites and I knew I would like to have one. The only problem that I had is The Husband.

By Unknown July 25, 2013
Today is an anniversary date. One of those dates you wish you did not have to remember but there is no way you can forget.
Fifteen years ago today,two days after his birthday, my father died of lung cancer. He was a lifelong smoker and his cancer was aggressive. His battle was short. He fought for six short months after his diagnosis. He knew the chemo was not working and that his time was limited. When he came to this realization he became the best dad in the world.
In the days before my father's passing, my family shared some memorable moments. One of those moments centers around the deli meat: Liver Cheese.I would not be surprised if you have never heard of it, or even never tasted it. But I was raised on it as it was one of my Dad's favorite things.
What is it? Well, it is a German food that is actually called Leberkase. It is bacon, corned beef, pork, and onion that is ground together and baked. It comes with a lard ring around the meat {which kinda grosses me out, so …
2 comments
Read more

By Unknown September 24, 2012
My worry in taking a wide range of kids camping is that the younger kids would be happy just playing together but the older ones, the one's in that awkward pre-teen/teen age, would think everything was so uncool they would just sit around and mope. So I designed a few activities that would hopefully get them up, participating, and moving.