We planned a four day getaway to Dora, Missouri to camp and canoe on The North Fork River. Here in Missouri, we call it a "float trip".

What can you expect on a float trip?

Most of the rivers that we float on are in the southern part of our state. It took us a good 5 hours {not including stops} to get to Dora, Missouri. At this point, even Missourian's are probably asking, "Where is Dora, Missouri?" Well, it is 40 driving miles away from West Plains, Missouri. 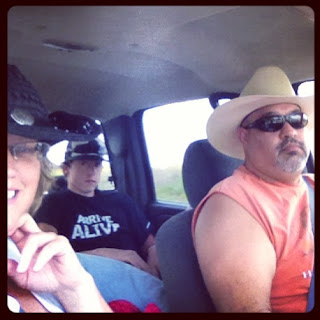 ﻿As is typical with most float trips, you can not access the river by interstate. Nope, in fact you must get off the busy roads and take the roads less traveled. We prefer to pop in a CD full of good ole country music and just enjoy the ride.

Of course, you will see lots of these signs: 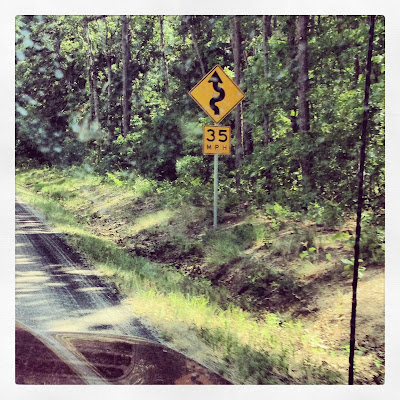 It gets curvy and hilly in the southern part of our state. It is the Ozark Mountains afterall! 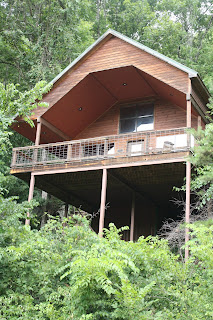 In Dora, Missouri, we stayed at The River of Life Farm. They are most famous for their treetop cabins {actually featured in the Wall Street Journal} which is how I found this isolated, friendly resort.  We ended up not staying in a treetop cabin but instead we used their RV spots for our Pop-up Campers.

When we arrived at the resort, we were greated by Bob, the Resturant Manager. He welcomed us all and invited us to an ice cream social. I think I might have busted his bubble a little because he used a standard joke about how no one brings ice cream to the resort so he supplies it. I had to tell him that we came prepared to make our own ice cream using our tin cans .  We immediately got to meet the owners and managers of the resort. The McKee's. All of us shared a first impression; these folks are just down right nice. Despite the fact that we had reservations, the owners encouraged us to wonder the RV sites and pick out the best ones for us.

We ended up selecting a double site at the end of this long road. We were a little ways from the public bathroom and showers but we were also isolated. 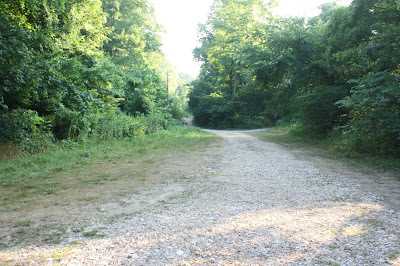 ﻿We set up camp and quickly set about enjoying the beautiful river. 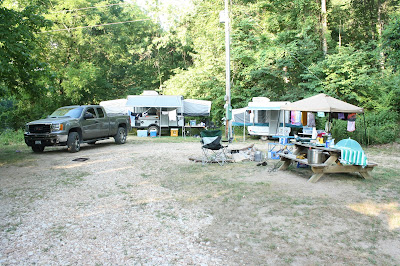 On our second day at River of Life Farm, we woke, had breakfast, made lunch and headed to the boat ramp. From their we piled into canoe's and went about floating down stream for a scheduled 4-5 mile float.

Here is my Short Chic ready for her first float. Water guns are a cool thing to take on the river. You never know when you might encounter another floater who wants to challenge you to a water fight. 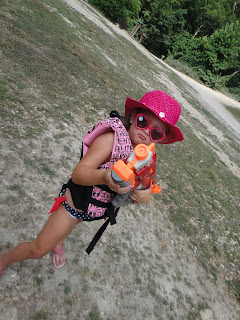 After taking off, we floated right past our campsite. Yep, that is how close we camped to the river. 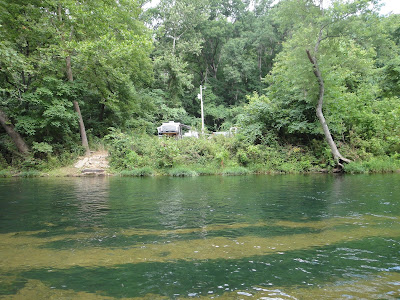 The river is beautiful! It is spring fed so the water temp is cool and crisp.  The day we floated it was warm outside but not unbearably hot. There was lots of shade to help keep us out of the sun. The water level was just about perfect too. I liked this river because it was not all still water. There was a decent current that moved us along and we encountered a few "tricky" parts that made it exciting.

4. A few encounters with Missouri Natives. 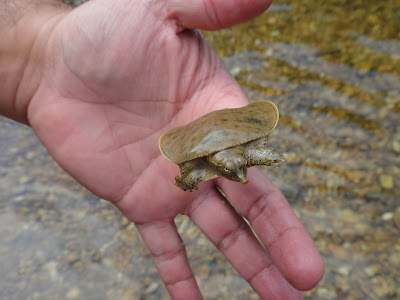 We also encountered lots of Missouri wildlife. We quickly saw a Copperhead snake warming itself on a rock in the middle of the river. {NOTE: this is not the type of wildlife I like to see when floating!} We saw a family of ducks. We saw lots of birds. And at our first stop, I nearly stepped on this little soft shell turtle. He certaintly did not like us picking him up. He twisted that tiny little neck all the way around and snapped at us till we put him down. I guess he is camera shy! 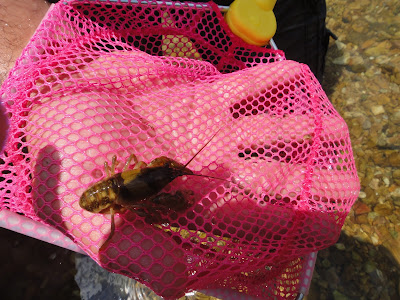 ﻿The Husband trout fished while we floated. I am sorry to say he did not actually land a single fish. The Short Chic accidentally netted one of these crawfish. There were tons of them in the river. She was just attempting to scoop moss "seaweed" in her net and got a crawfish "lobster" instead. It was the funniest thing ever to see her drop that net and run to the bank screaming "lobster" while her net floated down stream. He, also, was a little camera shy. 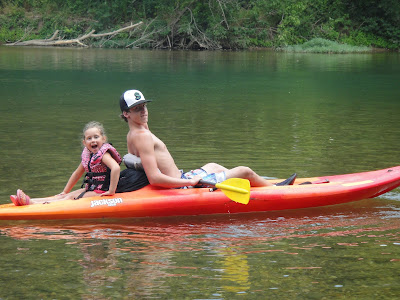 We can comfortably put three in a canoe and still have room for our cooler. The Boy decided to try a kyak out for the first time.

5. Making Memories that will last a lifetime!

The owners/operators of The River of Life Farm gave us a heads up about a spring we could encounter on our trip if we wanted to. The mouth of the spring is super cold and super deep. The Boy, The Short Chic and our friend "B" loved jumping into the mouth.

The mouth flows downstream and before joining the river has a nice man made fall. We were told about a secret door to the left of the steam that would allow us to get behind the fall so the kids could bust through the water fall. The water pressure is so heavy we were also warned NOT to wear any sunglasses or hats through the water fall. 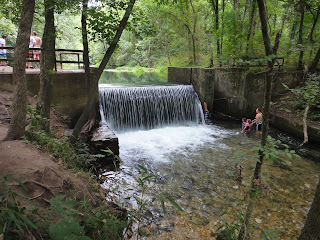 I was even able to shoot a simple video of the falls with The Husbands 100% water proof Sony camera. I am a horrible video shooter as I got so excited I forgot I was taking video and tried to shoot a photo of them. Hence ending the video rather shortly. {But that is okay, because my friend Angie fell seconds after I hti the stop button and no one gets to see her fall into the river!}


Did I mention that water is super cold? I waided over to the hidden door and I could not feel my legs.

In the end, we floated for seven hours. River of Life Farm picked us up and drove us back to our camp.

Day Three of our vacation was spent just hanging around the resort. We hiked up "Twisted Ankle path" to check out Inspiration Point.   The pro's to the hike is that it was well shaded, offered a pretty view from the top, and we all had cell phone reception for the first time in three days! The con to the hike, it was a steep climb that rendered most of us breathless at times! 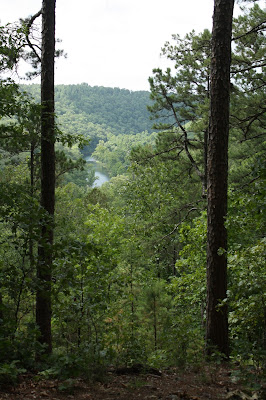 We found lots of spider webs, birds, and even a few bird feathers on our hike. We also found a natural spring that we enjoyed splashing water on our faces from! 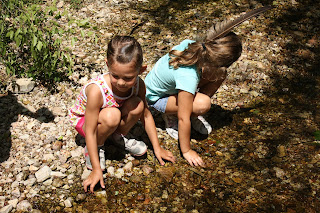 After an intense hike and walk in the woods, it was time to cool down. We were told that the owners had innertubes for guest to use to tube the length of the resort. We were also warned there were some "falls" that would make the tubbing a lot of fun!

So after our hike, we put on our bathing suits and grabbed some innertubes and took off walking to the far east of the resort. 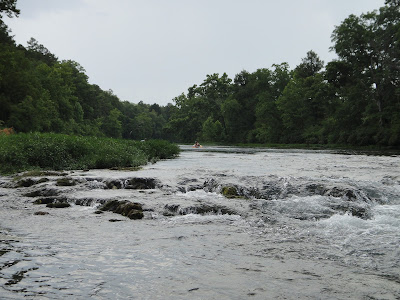 We then spent the next several hours tubing over these falls. Yes, even the little girls! "B" got stuck on one of the rocks during our last trip over them. Thankfully her daddy rescued her. The Short Chic begged her daddy to let her go at it alone. She has no fear! 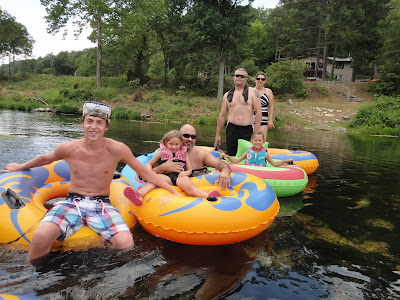 Day Four of our vacation was the day we broke down camp, packed up and drove the five hour drive back home.

So, there my friends. A float trip is a sumer staple here in Missouri. If you ever visit during the summer/early fall think about going. There are a lot of great rivers to float in this great state!