By Pamela March 28, 2013
After a two full days of amusement parks {The Magic Kingdom and Universal Studio's} it is important to recognize by this point you are tired and your feet hurt. You know you have walked a lot but you have no idea how much. 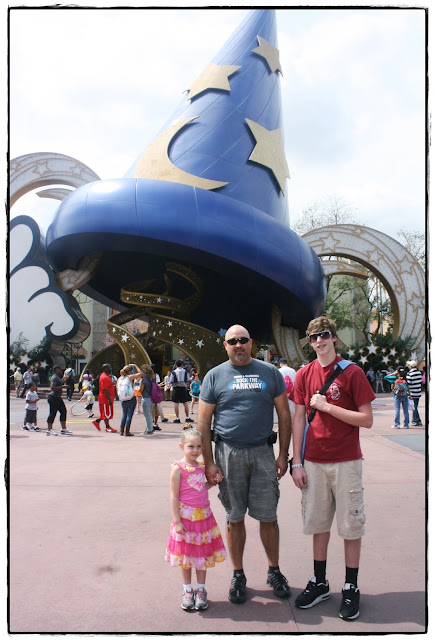 This is our second Disney day. We were up late the night before at The Magic Kingdom and we needed some rest. We let the kids sleep until they naturally woke up. Then we casually headed to the park.
We arrived at Disney's Hollywood Studios around noon. The Boys quickly went and got FastPasses for Star Tours. While they were doing that, The Short Chic and I headed over to Animation Court to see characters from Disney Junior. The Short Chic was so excited to see Jake and Handy Manny. 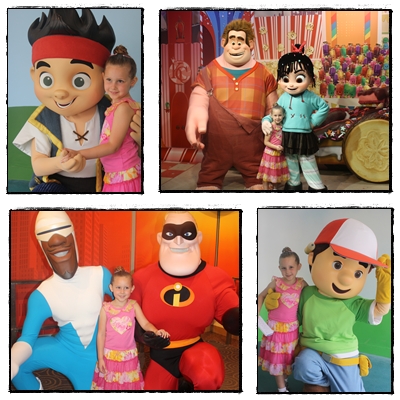 We were really hoping to see Princess Sofia but she is not a character to meet yet. We did see her at the Disney Junior Live on Stage show but it certainty was not the same. Maybe next visit. The Disney Junior Live on Stage show was cute. We enjoyed singing theme songs to some of The Short Chic's favorite shows. And only at Hollywood Studios do we get to experience snow in Orlando!

As I said in a previous post, seeing characters takes up a lot of time and we saw a lot of characters this day.  We were able to meet Wreck It Ralph and Vanellope Von Schweetz as well as Mr. Incredible and Frozone. Surprisingly, The Short Chic gave Mr. Incredible a kiss on the check. 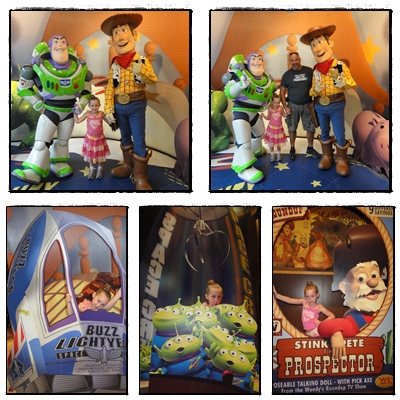 We continued to see characters. Daddy and The Short Chic waited to meet Woody and Buzz.They also saw Phineas and Ferb. They opted not to wait in the line to see the Stars of Cars 2.

It was silly, the judges try and take on the roles of American Idol judges. At one point I looked behind me and realized the contestants were really just singing karaoke {the words were flashing across the back of the studio audience}. But it was some good bonding time with The Boy. 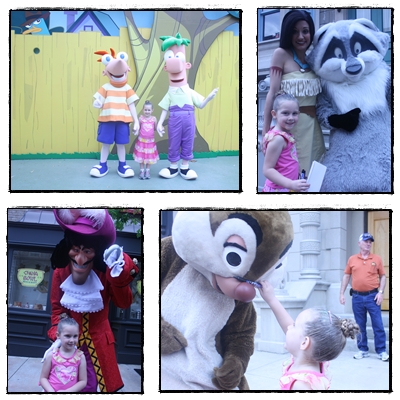 After meeting up with The Husband and The Short Chic, we found a quiet, almost empty dining area and we decided to sit. We were right next the Honey I Shrunk The Kids playground area. While The Boy played with his sister, The Husband went and got us a few "adult beverages". We actually decided we were in a good place to linger, so The Boy headed to our locker to retrieve our dinner. 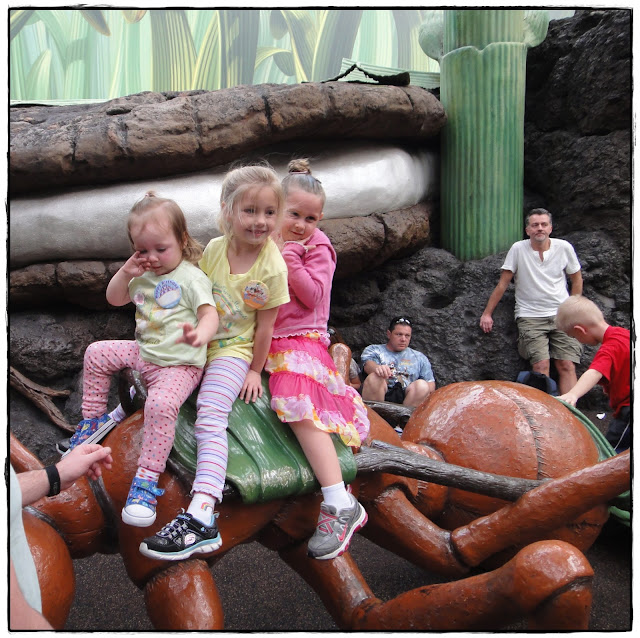 Sometimes, it is important just to sit and relax. And that is exactly what we did.

When we were ready, we got up and started heading to find The Beauty and The Beast Live on Stage show but we got way sidetracked. We were walking a back street and all of a sudden we saw a character walking down the street. We hollered and said hi! Then we noticed more characters. 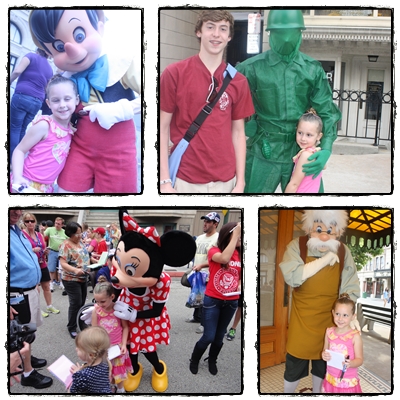 We were in the right place at the right time for an impromptu character greeting.  We end up meeting Pocahontas and Meeko, Captain Hook, Pinocchio, Geppetto, Dale, The Queen from Snow White, A Toy Story Army Man, and Minnie Mouse herself. 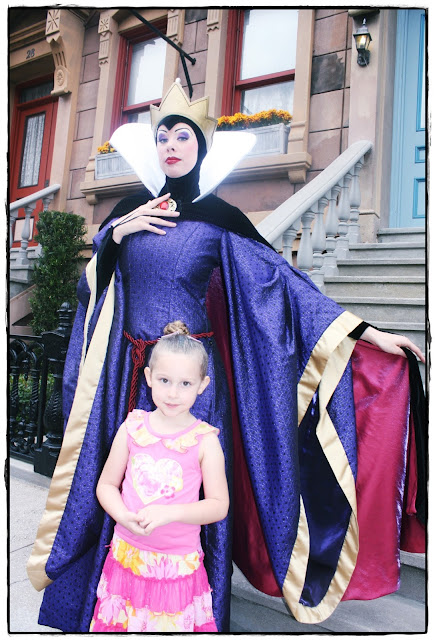 We had prepared her to meet Princess but we never thought about preparing her to meet villains. Maybe it is because she is a girl but she did much better when meeting The Queen a few moments later.

The Boy and I enjoyed walking around and just looking at the empty streets that were all movie sets. Where else can you visit, New York, San Francisco, and Orlando in a few short steps? 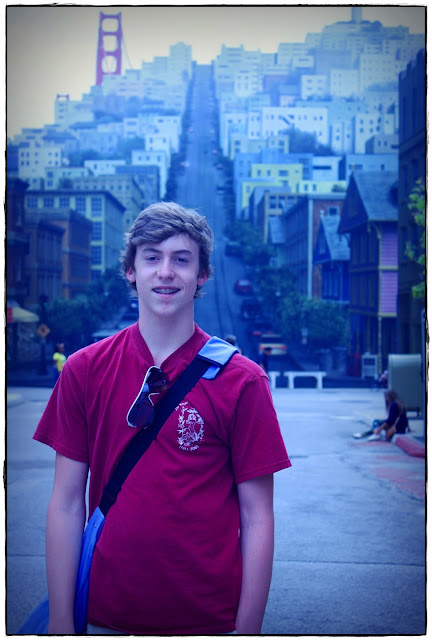 Overall, the day was busy. We still walked a lot but we were not crazy busy. We would have left early had we not wanted to stick around and see the nighttime spectacular...Fantasmic! We wanted to catch the early show so we could leave the park right after. We were told to get there early because seating is limited, so The Boy and I went an hour and half early. When we arrived there, the line was already huge.

However, it went by quickly, we got in, got great seats and were quickly joined by The Husband and The Short Chic. In case you all do not know, my Husband has never met a stranger. He sat down and immediately started chatting with a man who was from Florida.

I had actually brought a bunch of glow sticks from home and I broke them out during our wait. Lots of children were playing with lighted toys and a box of glow sticks kept her entertained and kept her from feeling left out.

The Short Chic literally fell asleep moments before the show started. We had the hardest time waking her up but she did wake up half way through the show.

Fantasmic! is an amazing show and I highly recommend using your Park Hopper pass to spend one evening at Hollywood Studio's just to see it.

Since The Short Chic had a power nap, we decided to stay after the show to try and catch one of the last two rides we had wanted to ride. The wait time for Twilight Zone Tower of Terror was now over 180 minutes, so we skipped it. Areosmith's Rock 'n' Roller Coaster had an hour wait time. We picked it.

In the end, the ride broke down. We waited close to an hour and half but we did ride it; The Boy and I. It was fun. Unique. And loud. Loud rock music and roller coasters just seem together. Why has this match not been made sooner?