As I said in a previous post, The Invitation, I did not want a Disney Princess party. I love Disney, but I wanted this party to be different, or as different as a Princess party could be. I also decided to not make everything pink (a very common color associated with Princess parties)

I started decorating a few weeks ago. I even decided to make homemade crowns for each of the little girls coming to the party. I would love to give you a tutorial but I can not because it violates the purchase agreement I made when I bought the instructions from "You Can Make This".  However, for $8.00 you can buy the instructions from Queen of the Party. 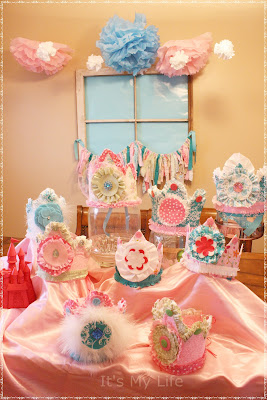 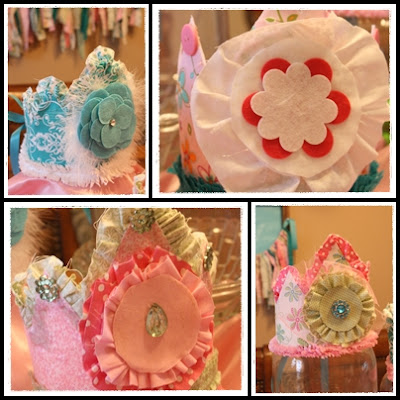 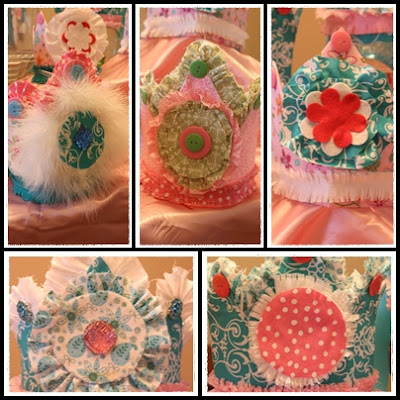 The party had seven stages. 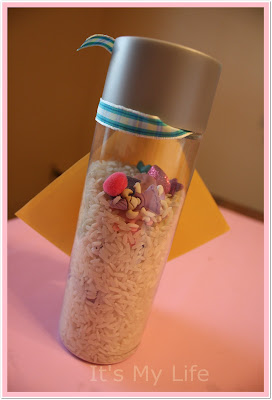 I saw these on Pinterest and fell in love with them. I collected Voss Water bottles, Princess trinkets, and rice to make the bottles. I like that this activity is all about developmental tasks. They had to use fine motor, scooping and pouring. It was great fun and a great warm up activity. 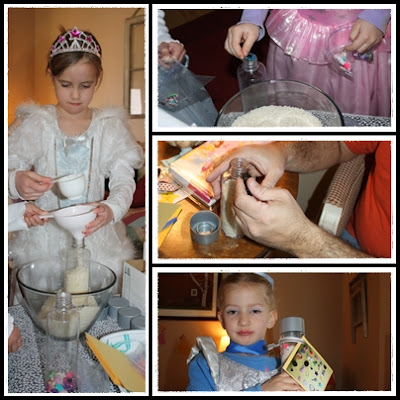 After they were announced, the Ladies walked down, curtsied, and was crowned a Princess for the day. 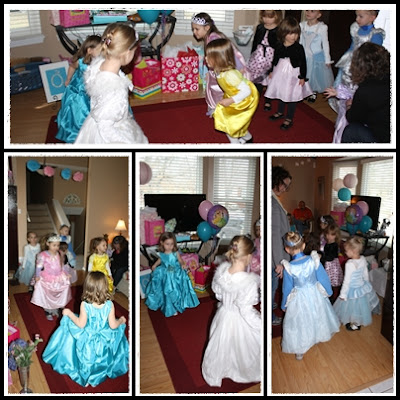 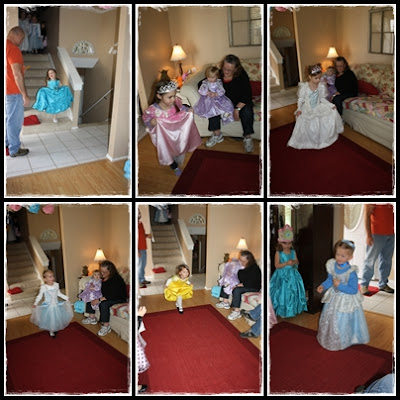 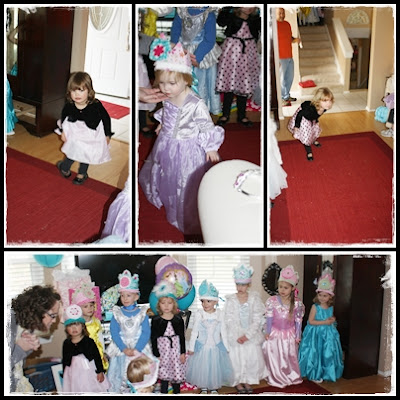 Every Princess has lots of jewelry. And these Princesses were no exception. Stage Three was jewelry making. I supplied a variety of beads, stretchy string, and I even bent a little and had Disney Princess Shrinky Dinks pre-made so they could add them to their necklaces. 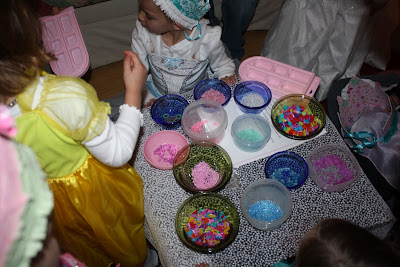 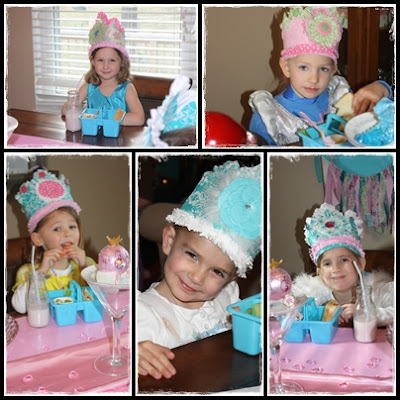 What party would not be complete without snacks! I served the Little Princess Peanut Butter and Jelly Sandwiches cut into crowns and served in inexpensive teal plastic organizers I found in the dollar bin at Target. I also made up three side salads and renamed them; a pasta salad, a green pea salad, and an apple salad. 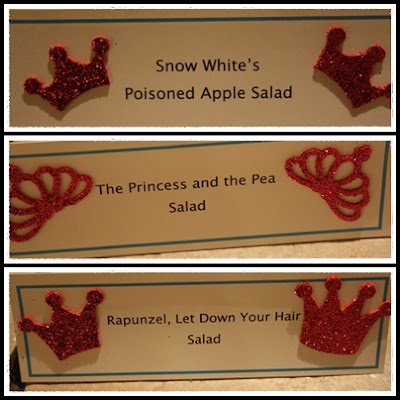 In addition, I made homemade strawberry milk. Yes, it was homemade, I made a simple syrup out of strawberries, water and sugar. It was yummy!

After Snacks, we had an intermission where Princess Short Chic got to open her birthday presents. 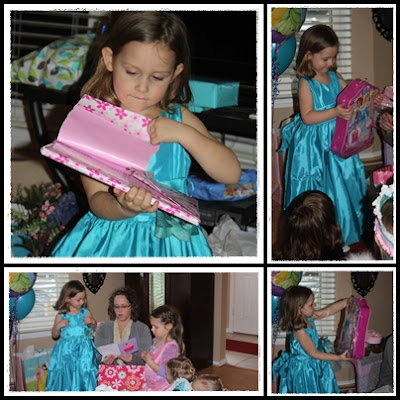 I worked pretty hard on the birthday cake. I decided to make a castle. About a week before the party, The Short Chic asks me to please make her a strawberry cake because pink is now her favorite color. (For those counting, this is her fourth favorite color: Blue, Green, Orange, and now Pink!)

I used a square pan for the base (strawberry layer) and then a round pan for the second layer (chocolate). I used tomato paste cans as molds for the towers (which are made out of rice krispies). 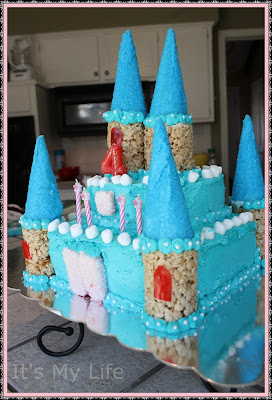 The peaks of the towers are sugar cones that I covered in frosting and rolled in sanding sugar.  I also had some edible pearls that I found in Jamesport this summer and used them to decorate with. When your daughter walks into a room (the kitchen) and gasps out loud that her cake is perfect, you know all the effort was worth it.

In addition to the cake, I also scooped the ice cream into cupcake liners the night before. (Another thing I saw on Pinterest!) Serving the ice cream has never been easier and I have to say,  I may never serve ice cream any other way! 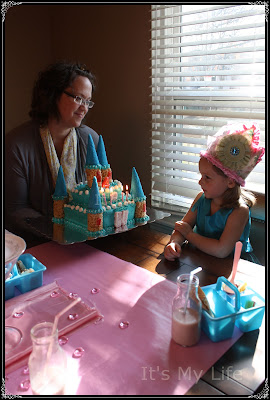 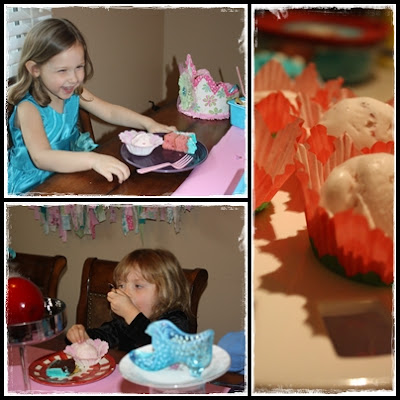 After snacks and cake, it was time to move! So we gathered the Princesses and had a game. The prep work on this game made it. I gathered a bunch of jewels. For each girl, I then selected three of two kinds, two of a few kinds, and then a few single jewels.  I then gathered a bunch of other jewels and put them all in sand.

I then gave each Princess a red plastic container to hold their jewels and read them the following story:

They then had to dig in the sand and find their jewels. 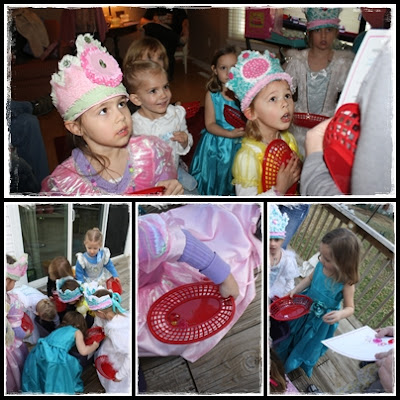 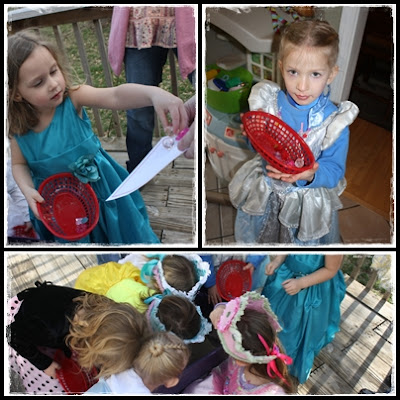 After they found their jewels, they turned them into me and I rewarded them for helping The Princess by giving them a goody bag filled with: princess ring, unbreakable bubbles, princess fruit snacks, marshmallow sticks, Disney Princess Pez, candy, princess wands, and bath fizzies.

As the Princesses were playing this game, several of the girls squealed they loved this game. THAT made me happy!

When I was planning this party, I looked for things associated with all princesses. I had a shiny red apple, a frog prince, a Cinderella shoe,a carriage, a castle, and from the movie Tangled, we decided to have a lantern lift off.  I collected 11 lanterns from various firework stores (one for each little kid at the party). Then I ended up ordering 10 lanterns from a company in Australia and 10 from a company in China.

If you can believe it the United States Postal Service delivered the lanterns from China about 35 minutes before the party! I was so excited!!

Our yard, as well as street, is full of full sized trees, so we had a Princess Parade to our community pond where we were going to lift off 21 Chinese Lanterns.

However...the wind had other plans for us. The wind immediately ripped apart several of the lanterns. If the wind did not destroy them then it would not let us light the fire pad. In the end, we hung our heads and walked home.

I am sure I had enough disappointment for everyone. The little girls kinda forgot about it and went about playing! 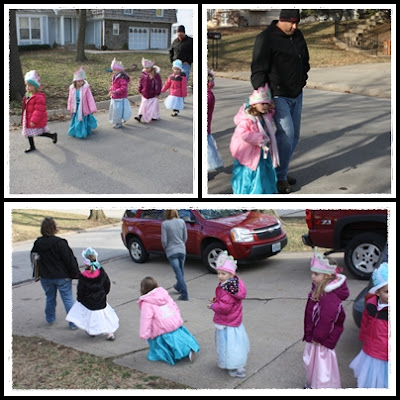 The good news, we still have lanterns to light/lift at a later, warmer, time!

Other random moments from our party: 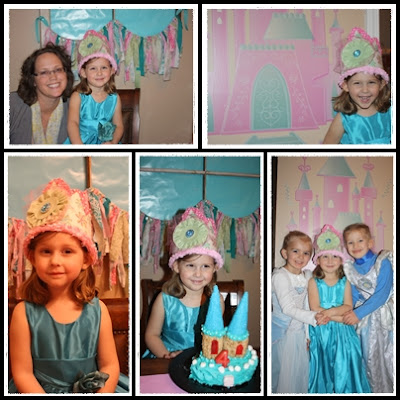 I found giant Princess vinyl stickers made by Disney to put on the wall. I used the generic castle instead of all the Princesses. OH yeah, and I made the wonderful garland behind The Short Chic and I's photo out of the leftover scraps from the crowns. A friend of mine at work gave me an old window and I used it as a backdrop for the party. I simple put some teal wrapping paper behind the window and then added some homemade pom poms above it. 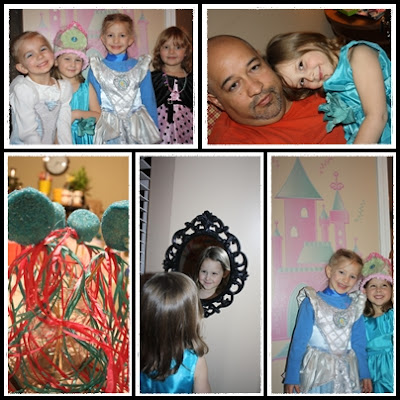 I made edible wands out of Oreo Cakesters.  I also picked up a small mirror from Hobby Lobby. It served as our magical mirror mirror on the wall.

We went to bed last night and I read The Short Chic Dr. Seuss' The Lorax (one of her birthday presents). The last thing she said to me before her eyes went shut for the night, "This was a perfect day!"

It melted my heart.