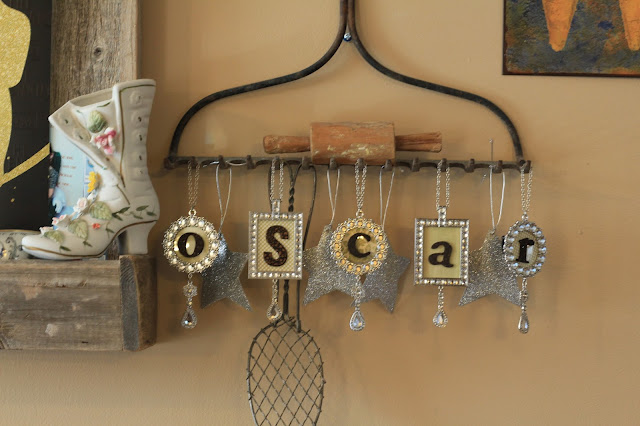 Another Oscar Season has finished. I feel a little sadness today knowing that it is over. I am also holding my eyelids open today because I am so tired!  I will never for the life of me understand why the Oscar's do not start until 6:30 Central Time. Hasn't anyone else figured out no matter how quickly you que the music to cut off the acceptance speeches the show is NEVER going to end on time.  I will say this, this was a great Oscar season. I absolutely loved 7 out of 8 nominations. I was inspired by some of the true stories behind the movies and found myself researching and learning more about the real life moments.

This was our 19th year celebrating Oscar. One one hand 19 years seems so long but on the other hand, it feels like it was just a few years ago. So many things have changed in the past 19 years. We started off with little hope of seeing Documentary Shorts, or Live Action Shorts, or even Foreign Films. Then we found ourselves running down to independent theaters. Now, we have apps on televisions and we almost do not even have to leave the comfort of our own homes to see nominated movies.

This year we indulged some of our favorite traditions and we started new ones. We still had a watch party, we still went overboard on the food we served food and we still spent hours deciding our predictions for the winners. However, this year instead of seeing movies individually, we decided to attend the Best Picture Showcase at AMC Theaters.  In years past by the time AMC scheduled their Best Movie Showcase, we had seen the majority of the nominations so it never made financial sense to us. This year, juggling the demands of family and life, we determined we would give it a try because we had not seen many nominations. 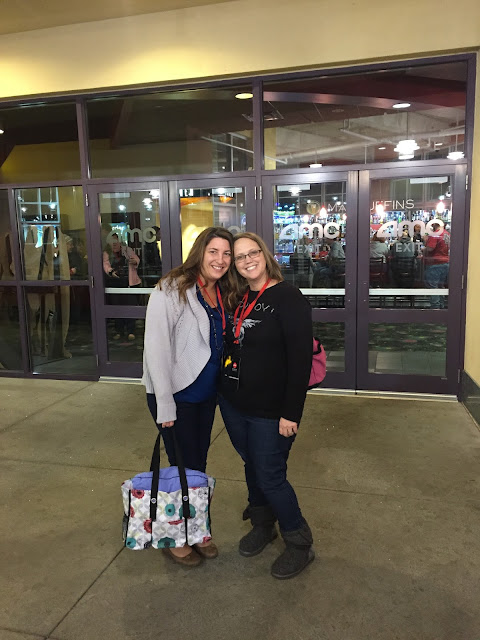 I am so glad we tried the Best Picture Showcase! Yes, sitting in a theater for ten to twelve hours is a long time; four movies in one day. But we learned you get a stretch break between movies, there are no trailers, and it was just fun being with a room full of other people who share your passion for the movies and Oscar. We also found that by signing up for the Best Picture Showcase, we were freed up to focus our movie watching on the other nominated movies. At a $35 per day price point, it was a great value.

Most of you know that we have a tradition of planning a menu for the Oscars that includes food or drinks based on each of the Best Picture Nominations. This year was no  different.  If we had a theme to our food it was miniatures. We focused on bite size portions and not a full meal. So, I give you, our menu and our thoughts on the movies.

When has Tom Hanks not been good in a movie? This is a quiet movie focusing on the cold war between the USA and Russia in the 50's.  We both really liked this movie, enjoyed the story, but honestly felt like it would not win Best Picture. 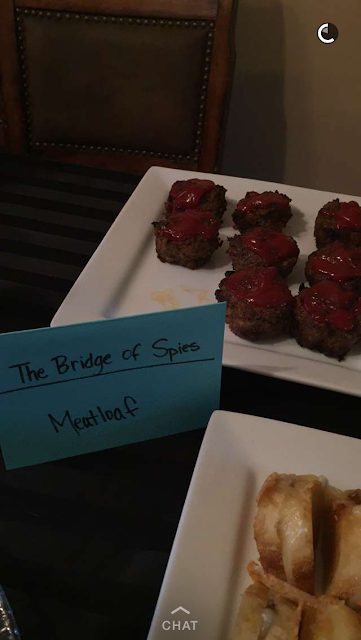 When deciding food for this movie, we forgot about the scene where the Tom Hank's daughter is on the couch watching TV and eating chocolate bars and peanut butter. We chuckled that this was pre-Reese's Peanut Butter cups (which I believe we were accurate in our joke) and maybe we should serve something with chocolate and peanut butter. Unfortunately, we forgot about that scene until they used it as a clip at the Oscars last night. Instead we focused on the meatloaf that was being served the night Tom Hank's character's family learned of his new client.

This movie was hard to watch. Yet it was funny, endearing, and tender. I wanted so much for the mom and son to be okay. I was so anxious during a portion of the film I am sure I was holding my breath. This movie shows us that a single person can turn an ugly horrible experience into a completely different experience for someone else. 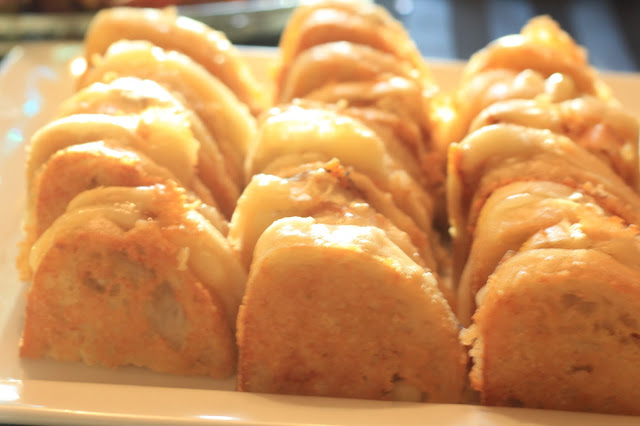 I think there are probably two types of people out there. Those that LOVE Mad Max and those who just don't get all those that love it. I am in that later category. This movie is full of technical things can make a movie great. It is no wonder it won so many technical awards last night. We thought the movie was one large car chase and I just could not figure out why it was nominated for Best Picture. 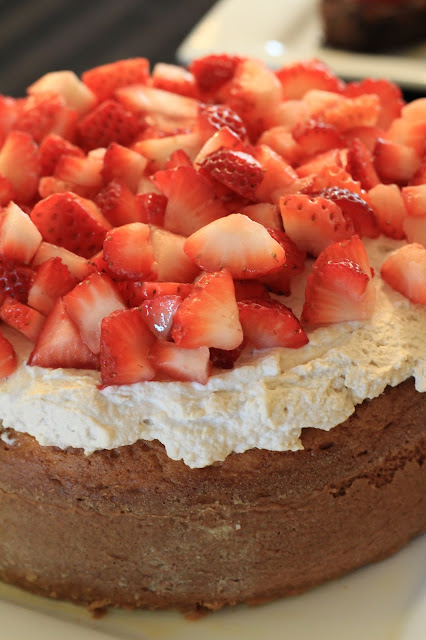 As much as we did not get it, we found the most food/drinks for this movie and because it was fun we just could not limit ourselves. We easily focused on two aspects; the quest for water  and the use of "Mother's Milk" to sustain the human race.  We served an Ocean Water Cocktail, we did shots of Mother's Milk (Rum Chata), and we made and served a Mother's Milk Cake, aka as Tres Leches Cake.

I am a social worker, which means I stir away from anything to do with math and that includes finances. However, this movie was so cleverly created that it spoke to me in ways that I understood. I found myself angry at the corrupt system that allowed our financial system to crash. 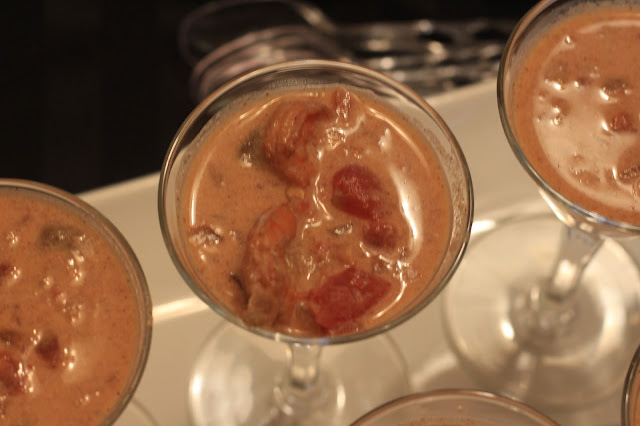 Our menu selection came straight from Anthony Bourdain's role in explaining SubPrime Lending in the way of turning a potential profit losing three day old fish into Fish Stew.  So, we made fish stew or as we called it SubPrime Fish Stew.

So, I should start off by saying I loved this movie. Yes, there were tender and even down right sad moments. No one pre-warned me I would need tissues, so I will pre-warn all of you. Tissues; have them handy. This is a movie that I know in the future when I stumble on it I will stop and watch. 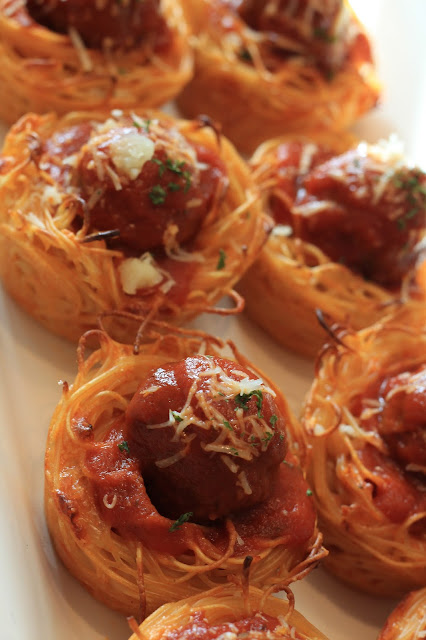 Our menu selection came from the part in the movie where Eilis learns to eat pasta for the first time. We made Spaghetti Nest with Meatballs. They were so yummy and fun and a big hit at the party!

Another really good movie that is based on true events that lead to The Spotlight section of the Boston Globe investigation and exposure of sexual abuse in the Catholic Church. The scene played last night at the Oscars here Mark Ruffalo is frustrated and yelling at his boss for not running the story echoed my feelings while I watched it. Years of abuse of children by Catholic Priest and the systemic cover-up that occurred for decades. Maybe it is the social worker in me, but it is time we protect our most vulnerable people. As we left the theater from this movie, I know many of my friends steer away from Oscar winning films because they think they won't be their kind of movie. Don't let miss this movie! 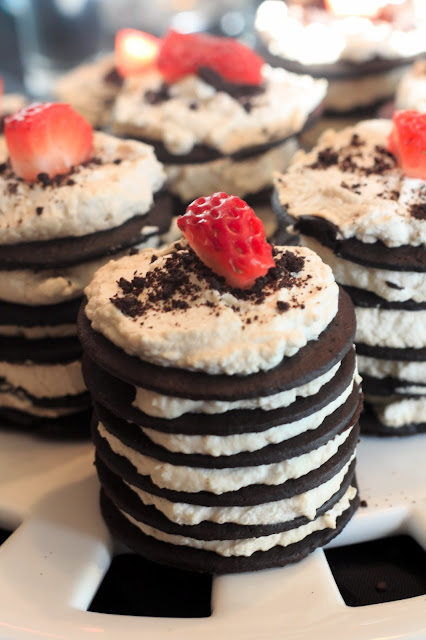 Finding food for this movie was hard. We could have selected IPA beer that seemed to be shown frequently, or pizza or even a boiled hot dog. None of those things sounded like good fits for us. So instead we went more abstract. The Boston Globe is a newspaper; they are black and white. That lead us to a childhood joke, "what is black and white and read all over?" We created Cookie Wafer Stacks topped with strawberries.

Funnier than I was expecting full of so many funny and memorable lines in this movie. Tracy's favorite line from the whole movie was "I am going to have to science the shit out of this." 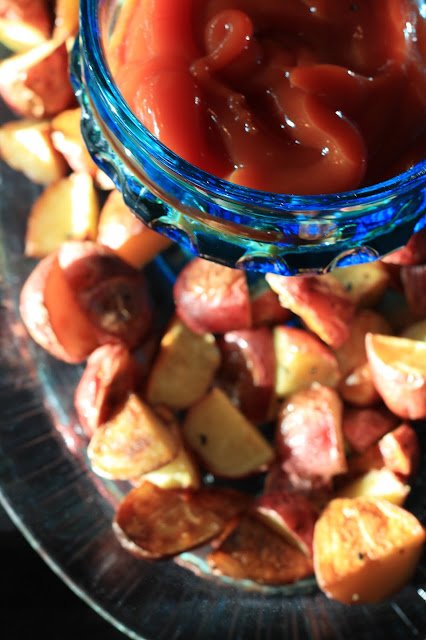 There is no way our Oscar menu would not include potatoes and ketchup for this movie. Mark Whitney grew potatoes on Mars to supplement his food supply and when he runs out of ketchup I can totally relate!

The Husband loved the movie, I neither loved or hated it, and Tracy was bothered by some of the technical issues. It was difficult to watch in places; bloody and painful. What was clear; this was Leo's year! 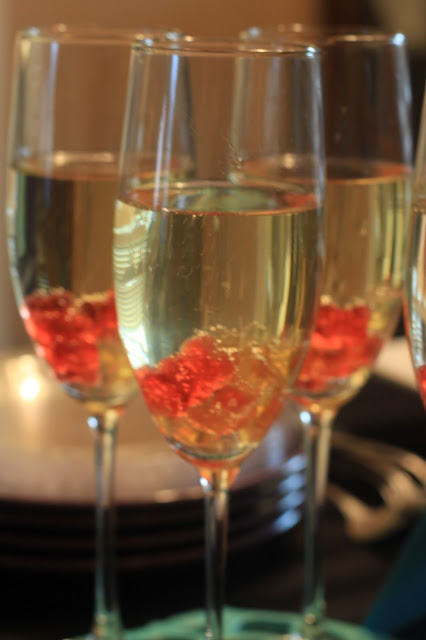 We served Bear-llini Cocktails in honor of this movie. We soaked gummy bears in Peachtree Schnapps and then poured sparkling wine over the top. Fun and delicious!

There you have it. Another year of Oscar! I hope you enjoyed our story! All that is left for us to do is debate the best and worst dressed. If you get the notion, you can always leave a message and let me know your pick.