By Pamela February 19, 2016
Last weekend, The Husband and I spent some time out on the town having a couple's date night. I can't even tell you when the last time we did something without either one of our children and with other adults.  We are more likely to go do things solo so the other is with the kids but this time we called in the grandparents and asked for a sleep over.

You know what: we had the most fun imaginable and had a great time! 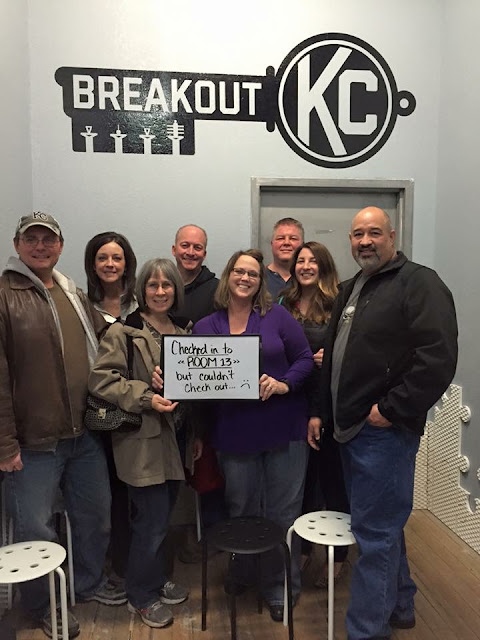 A few months ago, back when it was still fall, my cousin called up and wanted to know if we would go to a new business here in Kansas City called Breakout KC. I had never heard of them but felt we were game for anything. Little did we know just how much game we were going to get into.

Breakout KC opened here in Kansas City in the Spring of 2015 and is a live action escape room. Here is the five minute details:  there are four themed rooms to select from, you enter the room of your choice and are "locked" in. You must solve a series of clues, which are all hidden inside the room, to find your escape. All in 60 minutes.

The room holds eight people at once and you are encouraged to bring a total of eight people. If you come in with less, Breakout KC does reserve the right to add people to your party. The cousins did a great job of getting eight people to commit so thankfully, we went in as a full group. I should also note that we each paid $28 for our one hour of game time.

Discussing the details of Breakout KC is like sharing the ending of a movie to someone who has not seen it, so I will not disclose very many "details". I will say this, with 8 people working on clues at the same time, things got a little chaotic! Clues were found sometimes and I am sure I missed how or where they came from. There were a few surprises and a few surprises we anticipated.

In the end, we did not breakout in our 60 minutes. We had to be rescued from our room by the staff. But, we were so close! I am confident that if we had another five minutes we would have broken out. Next time.

Just in case you are wondering a few extra details:

1. We were locked into Room 13.
2. You are not really locked in the room. The staff monitor the room through audio and video at all times and if you honestly need out of the room you can get out.
3. Look everywhere and pay attention!
4. The owners/designers are really good at creating puzzles.
5. Market 3 is a great place to catch a drink before hand.
6. The Farmhouse is an amazing place for dinner afterwards.
7. Numbers 5 and 6 can be reversed if need be.
8. The rules stated I could not take any photos during our time in the room. So I did not.
9. I really am a rule follower.
10. From the photos on Facebook, even kids have done Breakout KC, making this even a possible family outing.