By Pamela July 10, 2015
This week has been a super crazy one. The Boy has been gone this week. He is on vacation in Michigan.  We had severe weather hit our area Monday night. Before we could recover from that, Tuesday morning we had another threat in our neighborhoods. An armed gunman entered two homes in our area and shot a mother and daughter. Our entire community went into lock-down mode as the police searched for the escaped gunman for hours. Thankfully, The Short Chic and her Summer Activity Director (aka: The Babysitter) were not in our neighborhood during the lock-down.

The entire community has remained pins and needles as no arrest has been made. We continue to pray for the health and recovery for the victims. We also try to balance our need for information with the families privacy and the police's ability to do their job.

With all of the craziness in our lives I have not taken a moment to reflect on our Independence Day weekend camping trip. 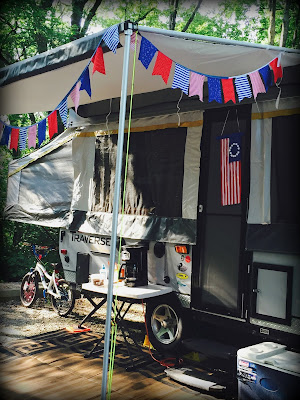 Once again we visited Watkins Mill State Park with several of our camping friends joined us and I think we ended up with approximately ten families in our group.  Scooters, glow sticks,  kickball, and near urgent care visits dominated the weekend cul de sac that we called our home.

Camping on holiday weekends always brings us camping visitors. The Husband's parents joined us Thursday night as we celebrated his mom's birthday and had a fish fry. We were also joined by the Turley family Thursday evening. My Momma joined us Friday as did my cousin Dennis and my long time best friend Dana. Saturday morning Angie's dad came to visit us. Then The Husband's dad, sister, nephews, niece, and great niece joined us for an afternoon of camp fire and swimming. Even my longtime former co-worker Debbie made a brief stop by the campsite. Such a great time visiting people who are important to us! 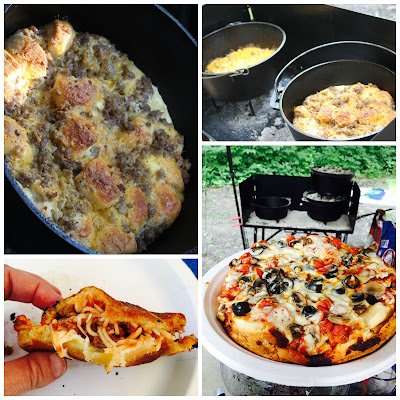 Forcing the girls to take a food break was the only thing that slowed them down the entire weekend.

We enjoyed fireworks. Naps. Some paint can (I will devote a whole post to paint can another day!) I even managed to read an entire novel! The most amazing thing about the entire weekend might not have been the celebration of our nation's independence but rather the unseasonable cool temperatures!
We are accustom to triple digits or near triple digits this time of the year. Instead we experienced mid 80 degree days and cooler nights.  The cooler temps did not stop the little girls from hitting up the swimming beach. 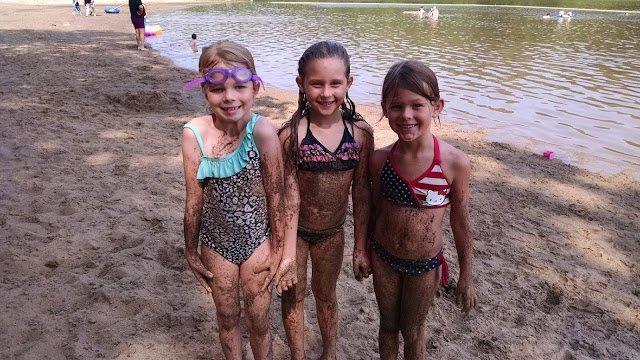 Before I wrap up this post, I should say that I attempted a few new things. I saw the jar of eggs on Pinterest and I have to say, I tried it and I liked it. I was able to store a dozen and half eggs in one quart jar. When I went to make breakfast I easily poured out the amount of eggs I needed. And not once did I have to worry about breaking any eggs in transport. 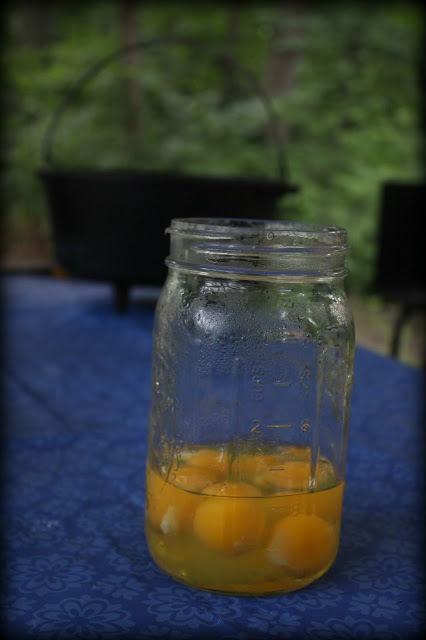 The last thing that I am able to show you in my new camping flag. After earning the Missouri Camping Award, I was trying to figure out the best way to display our new award. I decided to make a flag to hang on my PVC Lamp Post. At Hobby Lobby I found some water resistant material created to line the bottom of a couch. Hobby Lobby had lots of colors of the material so I made an applique camping scene and then sewed my camping award to the flag. I left room on the right hand side of the flag to add the five year awards, assuming we will earn a few of those. I also left room under the camper award for the year bars that we will keep earning.

My Grandma Baker was an applique quilter. I have to say it looks easy enough but it is tedious! I think she would have been proud of my first attempt. 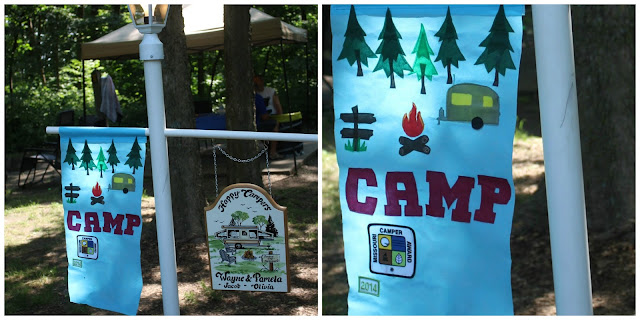 The good news, this camping trip made our third campground this summer. Two more to go and we will earn our second camping award!