By Pamela August 12, 2014
It does seem as if we make an annual trip to Bennett Spring State Park. We love the camping there and the fishing! This year we also planned a float trip down the Niangua River as we also try to take at least one float trip per year.

Bennett Spring State Park is only a few hours from our home; making this a really reasonable drive. There are six total campgrounds and we prefer campground Number 2. The bathrooms/shower facilities are a little dated but the space the park gives you per camp-sight is worth it!

As we drove in we encountered a female deer and two fawns. I was happy to find that we encountered them several times during our stay. They even made an appearance during dinner on our first night. 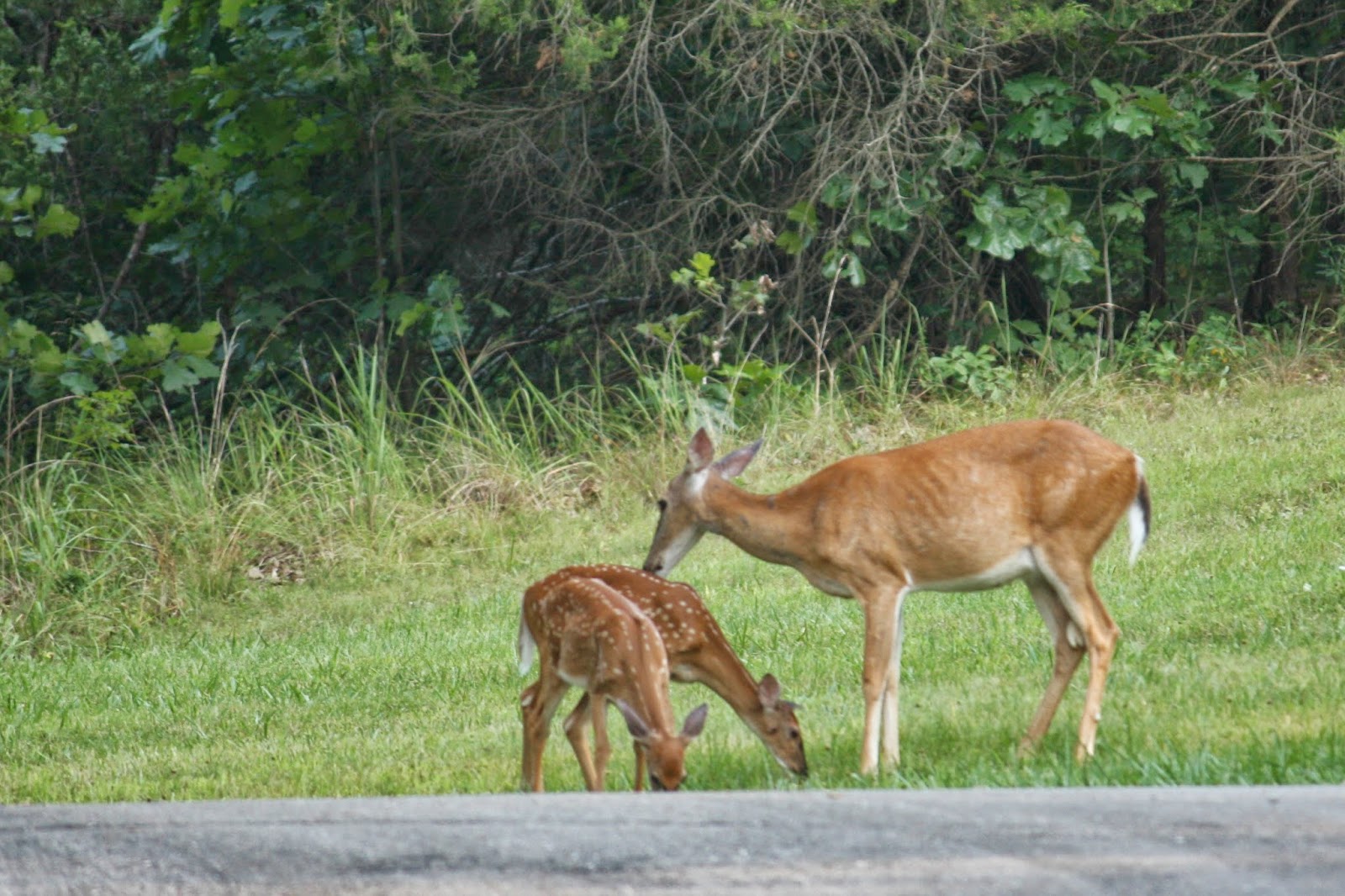 I wonder...does anyone else have to take American Girls along on their camping trips? 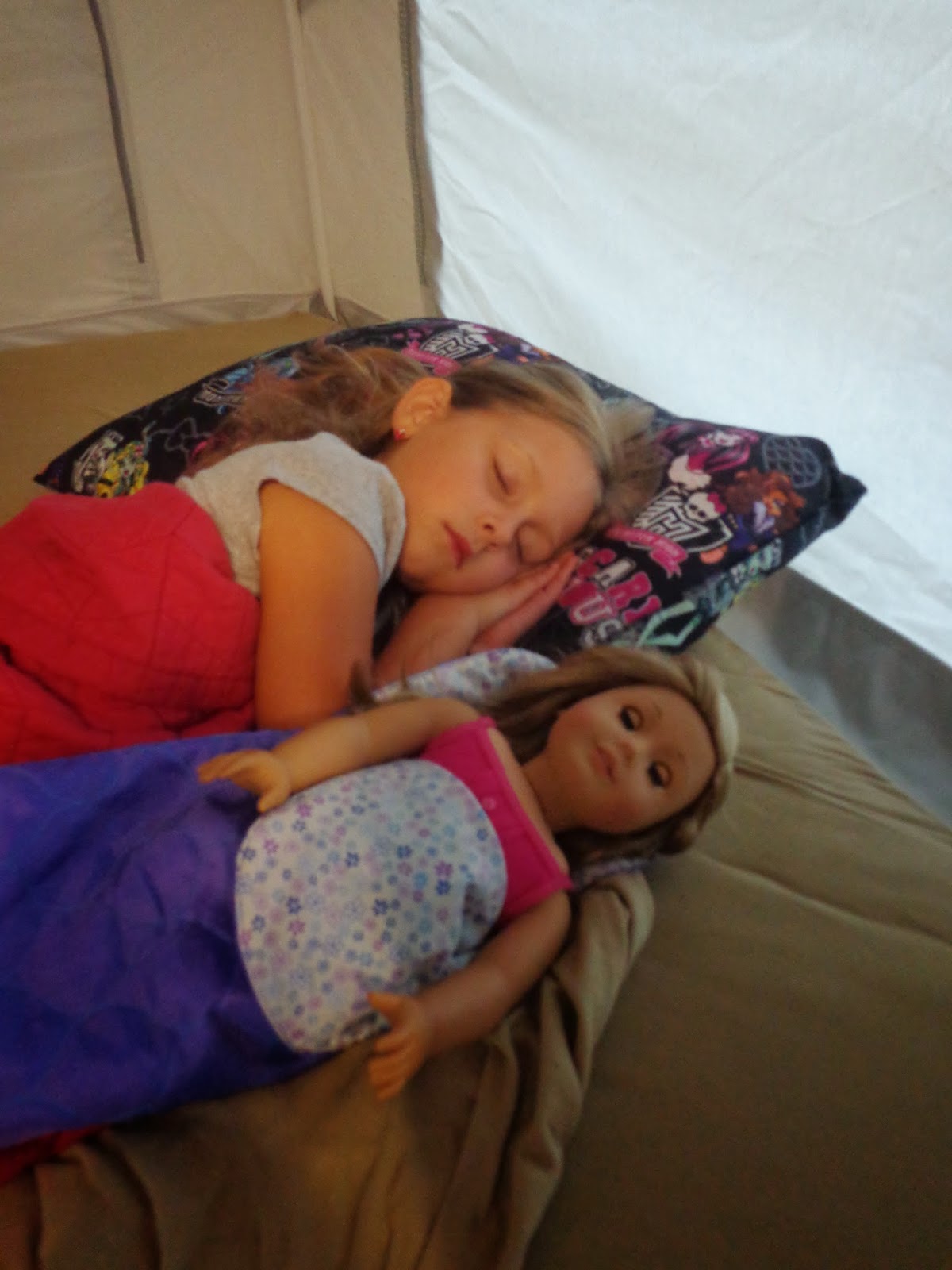 The Niangua River is a spring fed river so it is might chilly. It is rocky. And it is traditionally known as a party river because it is so close and accessible. While law enforcement officials have a strong presence on the river on the weekend, we decided that we still did not want to take a chance since we were canoeing with the young ones. We opted to float on a weekday.

Bennett Spring State Park does rent canoe's but we opted to rent from Sands Spring Resort instead. They are conveniently located next to the park and they allow those over 21 to bring adult beverages along. Their staff were super friendly and even shared some fishing tips with The Husband on the drive home. 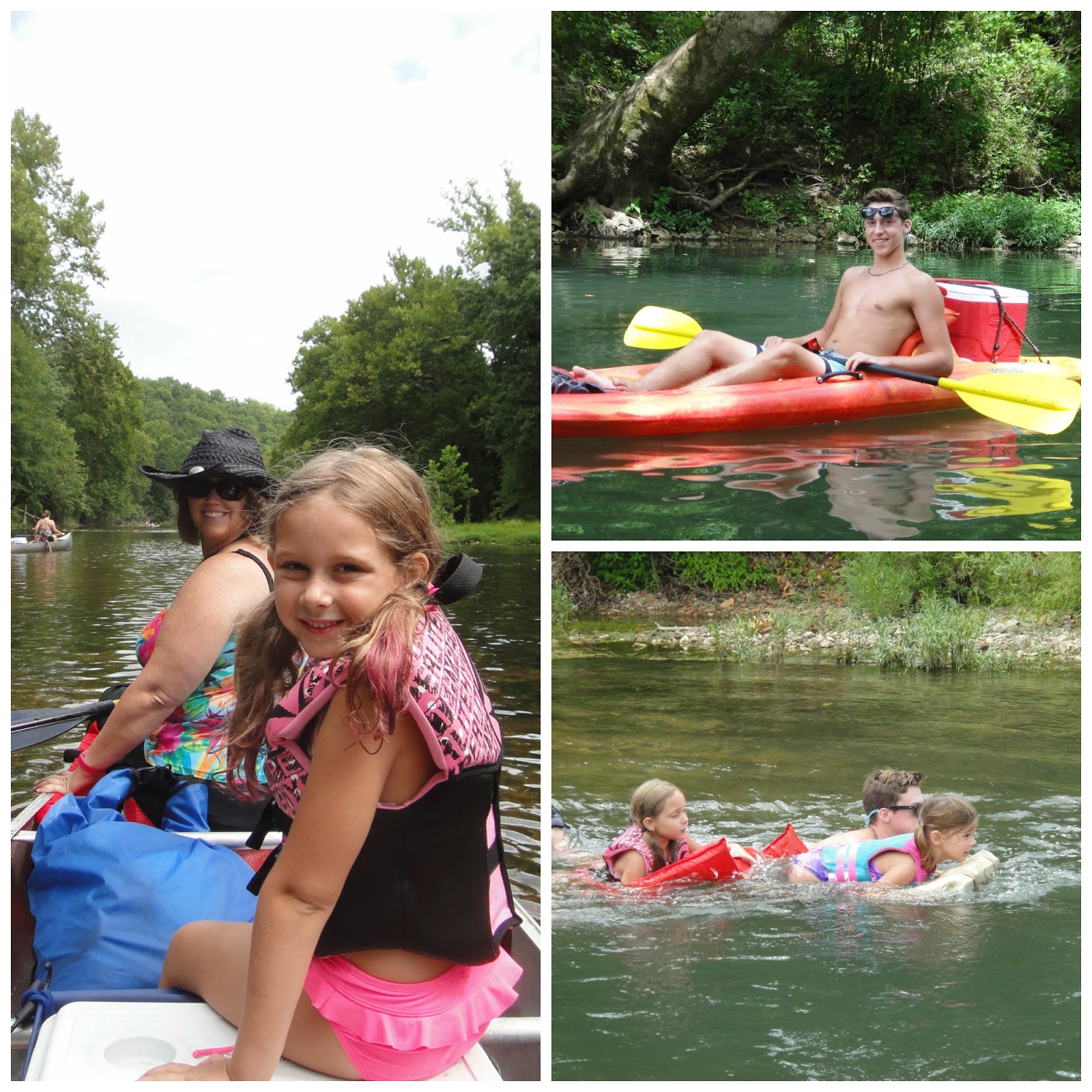 We had been on the river less than five minutes and trouble hit. We ran the canoe into a rock, which The Husband and I were able to maneuver but it did let in some water. Moments later as we bumped into another rock and took in some more water, The Short Chic started freaking out because we had a "lobster" in the canoe.  Of course there was no lobster but instead a tiny crawfish but that did not stop The Short Chic from upsetting the balance of the canoe and tipping us over. The canoe hit my head, I hit the rocks, and my flip flops floated down stream. Man, we must have been one crazy sight!

Next year, she will get her own floating devise!  As much fear as she has over crawfish, she has no fear in other areas. The half way point to our float was this mud bank. The water below is super deep and allows for some safe cliff jumping. As soon as she saw the others jumping, The Short Chic wanted to jump too. We bargained with her to do the mudslide instead.


(sorry about the sideways video. For the life of me I could not figure out how to rotate it on youtube!) 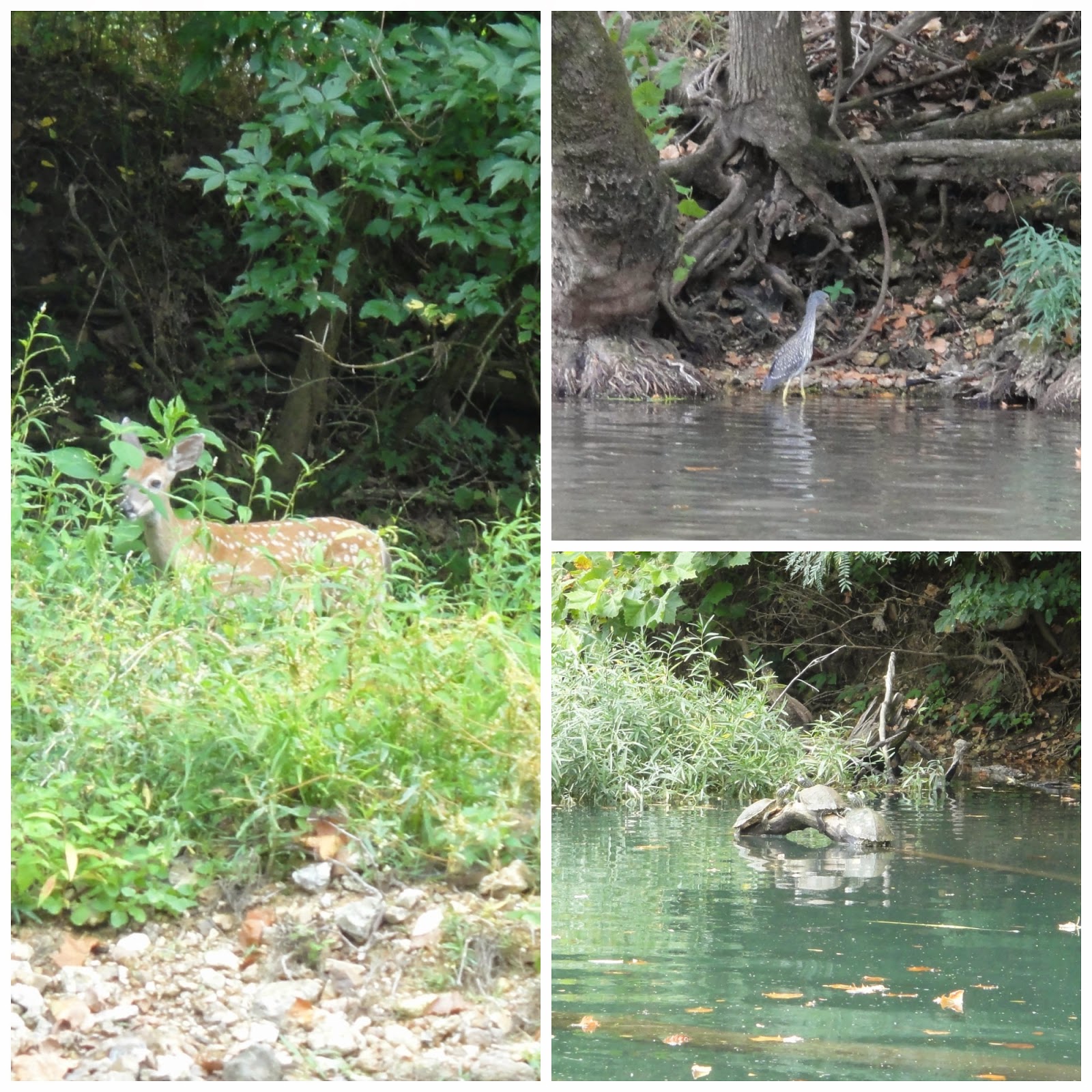 The rest of the float trip was uneventful. The Short Chic's friend showed her how to "body surf" down the rapids using their flotation devises. We encountered lots of wild life on the river; fish, crawfish, snakes, turtles, birds, and even a fawn.

After our fun day of foating, the men folk started fly fishing. We actually had seven fishermen in our group and they all managed to catch a few fish (even the newbie)! Our hope is that they catch enough to feed us one night and I think they all felt the pressure to preform. 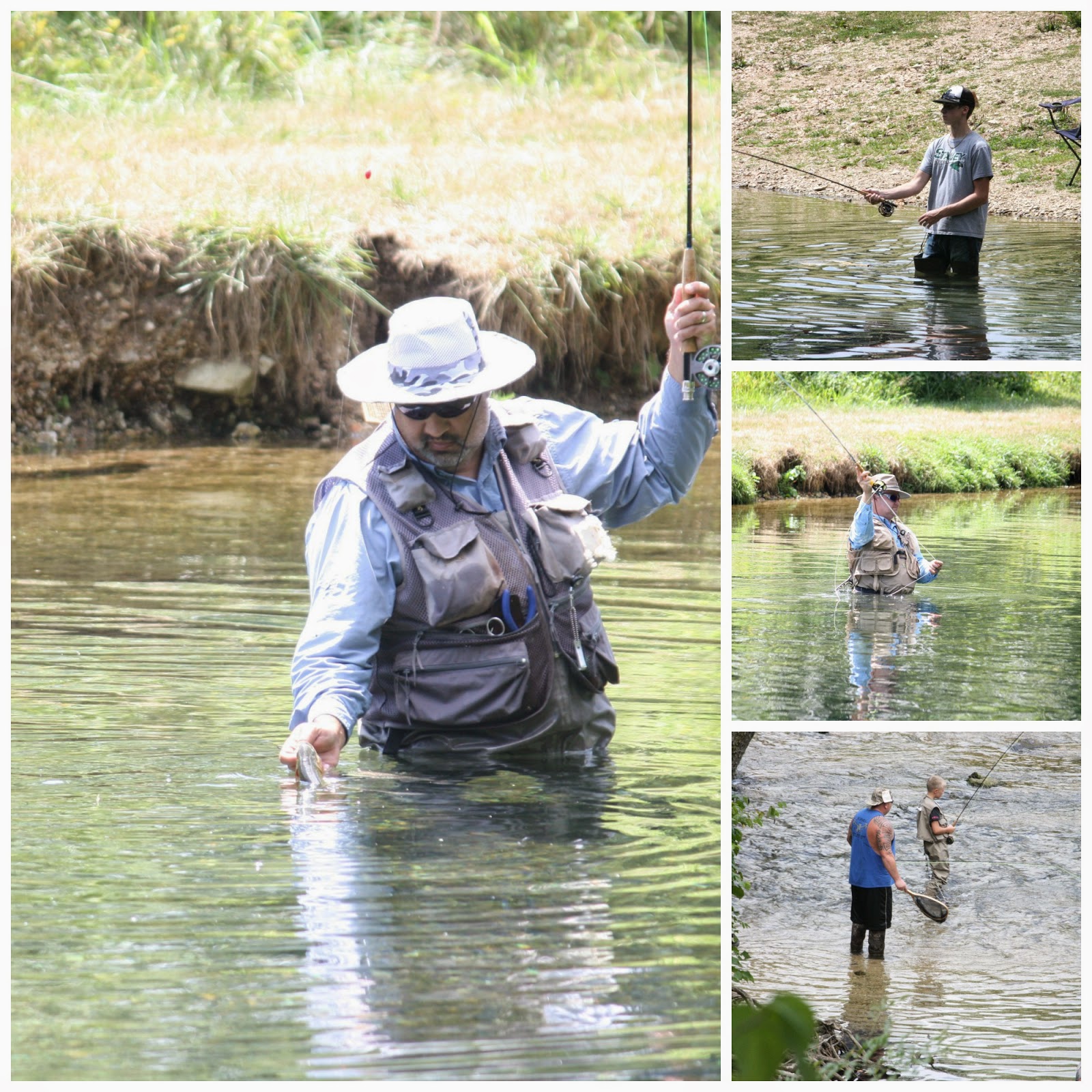 While the men folk fished on Saturday, we girls went for a hike. As we have found in other state parks, a lot of the trails are connected so we started on one path and found ourselves ending on another. I believe we tried to hike The Bridge Trail, switched over to the Bluff Trail, might have wondered onto the Whistle Trail and ended up taking the Spring Trail to the end. 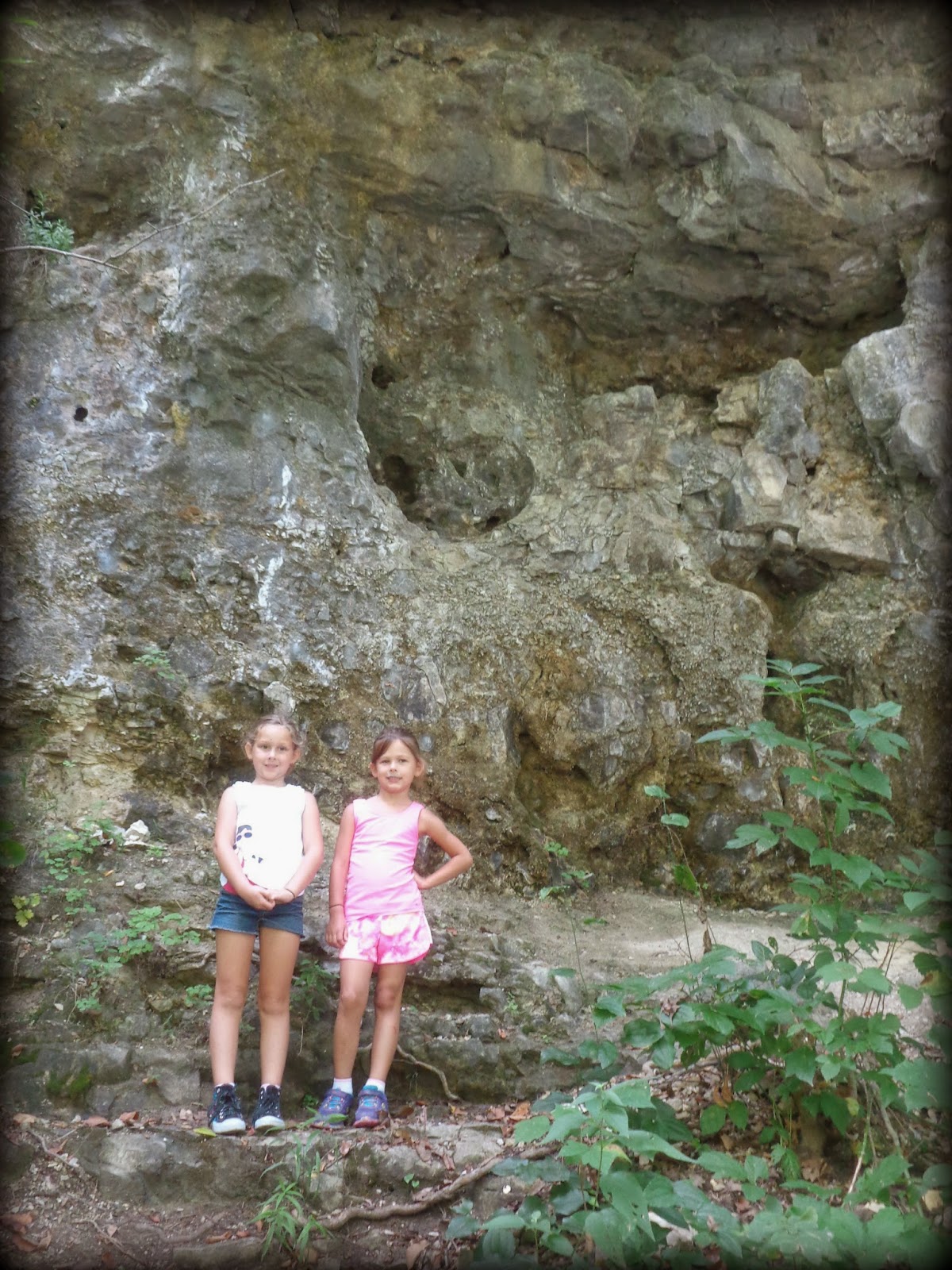 All-in-all, we hiked for nearly four miles, climbed one huge hill, and got ourselves completely eaten by chiggers!  One of the coolest parts was after climbing the really tall hill, we were able to spy our men folk fishing in the river below. 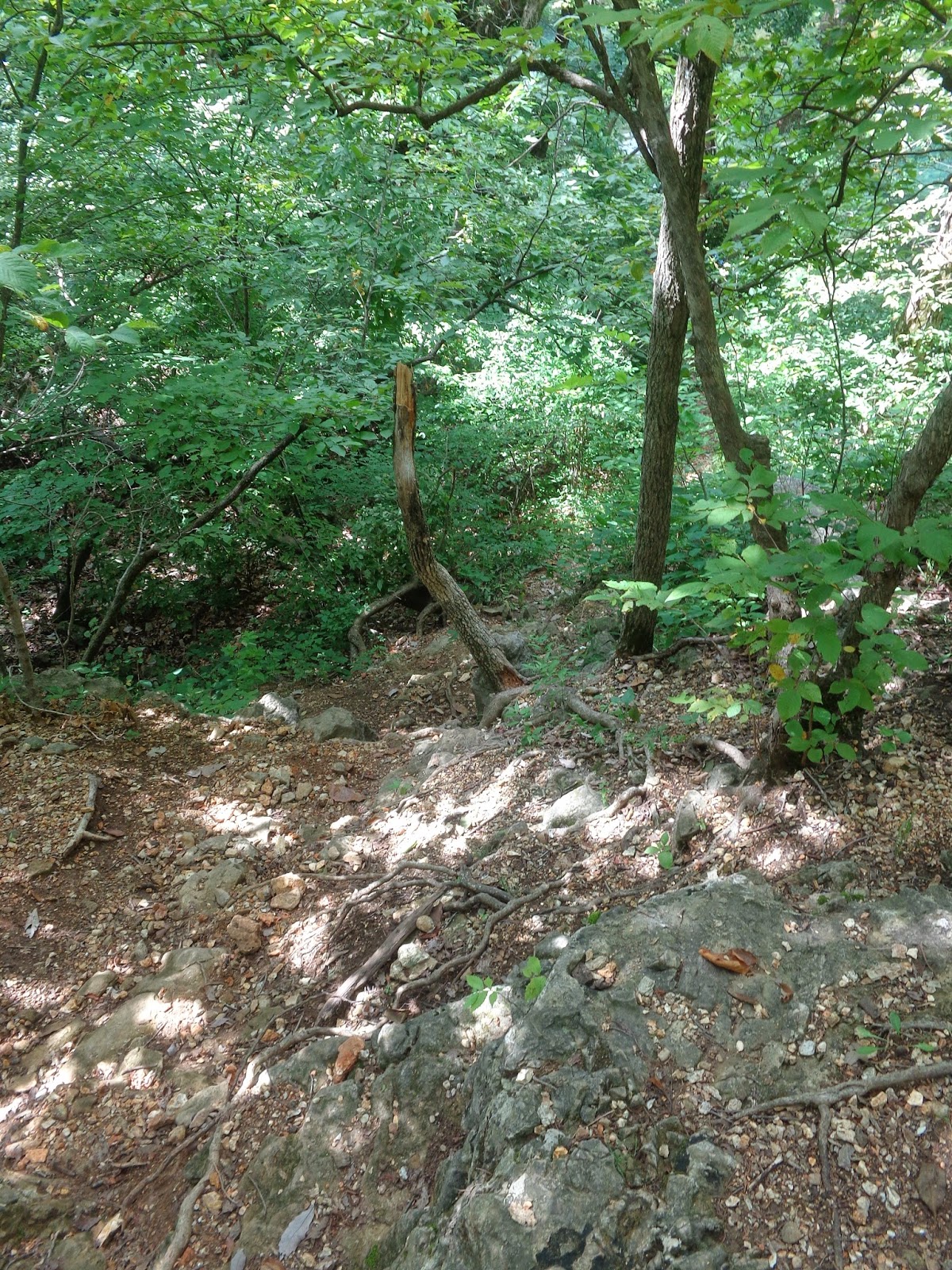 Another cool site we saw was the actual spring. I love how the water changes colors and you know right were the spring is located. Spying this was practice for The Short Chic for bigger trips to come! 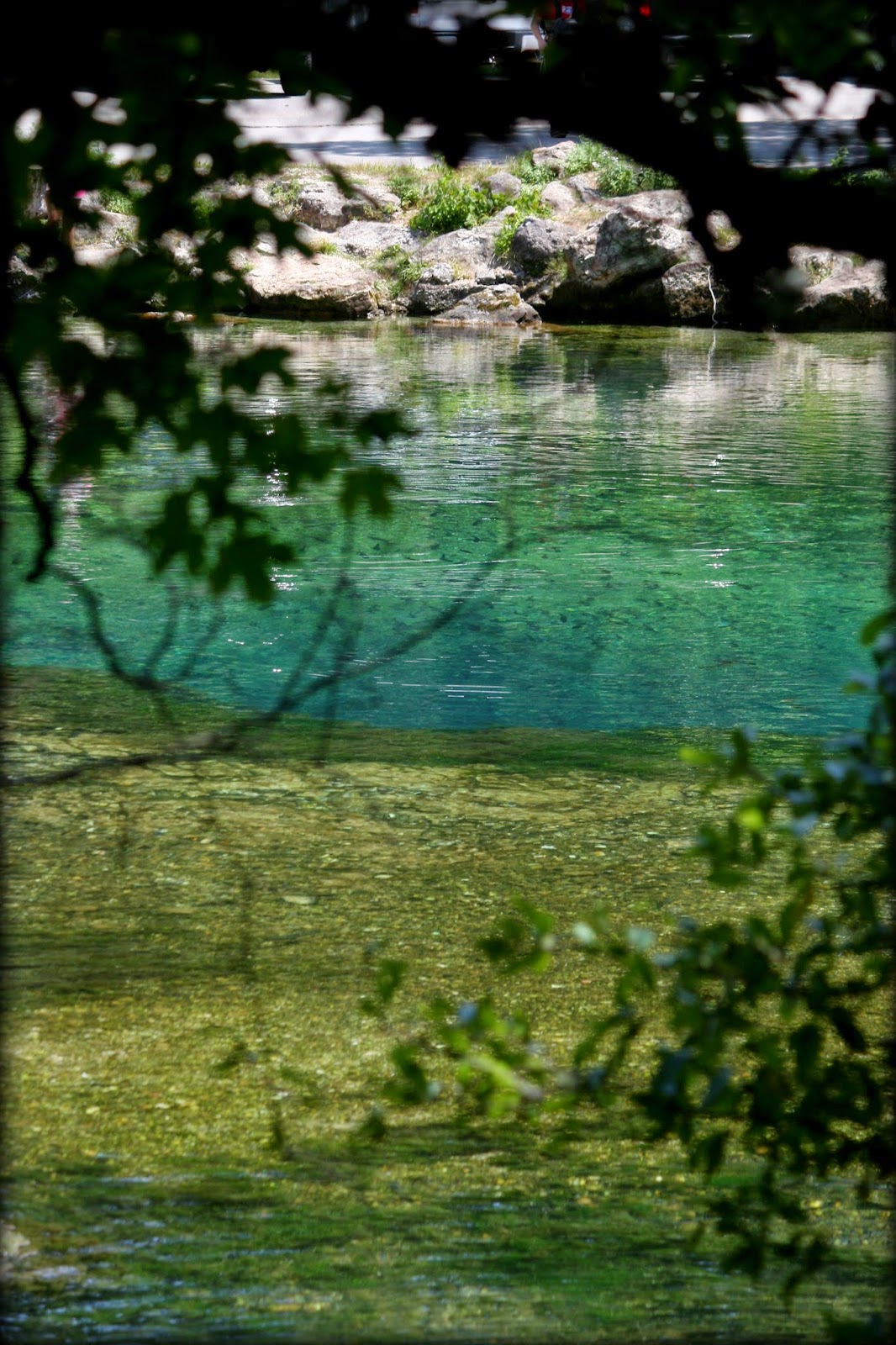 By the time we made it to the gauge house they were pretty exhausted of walking. Thankfully they thought the gauge house looked like Rapunzel's tower and were inspired enough to stop complaining for a few minutes. 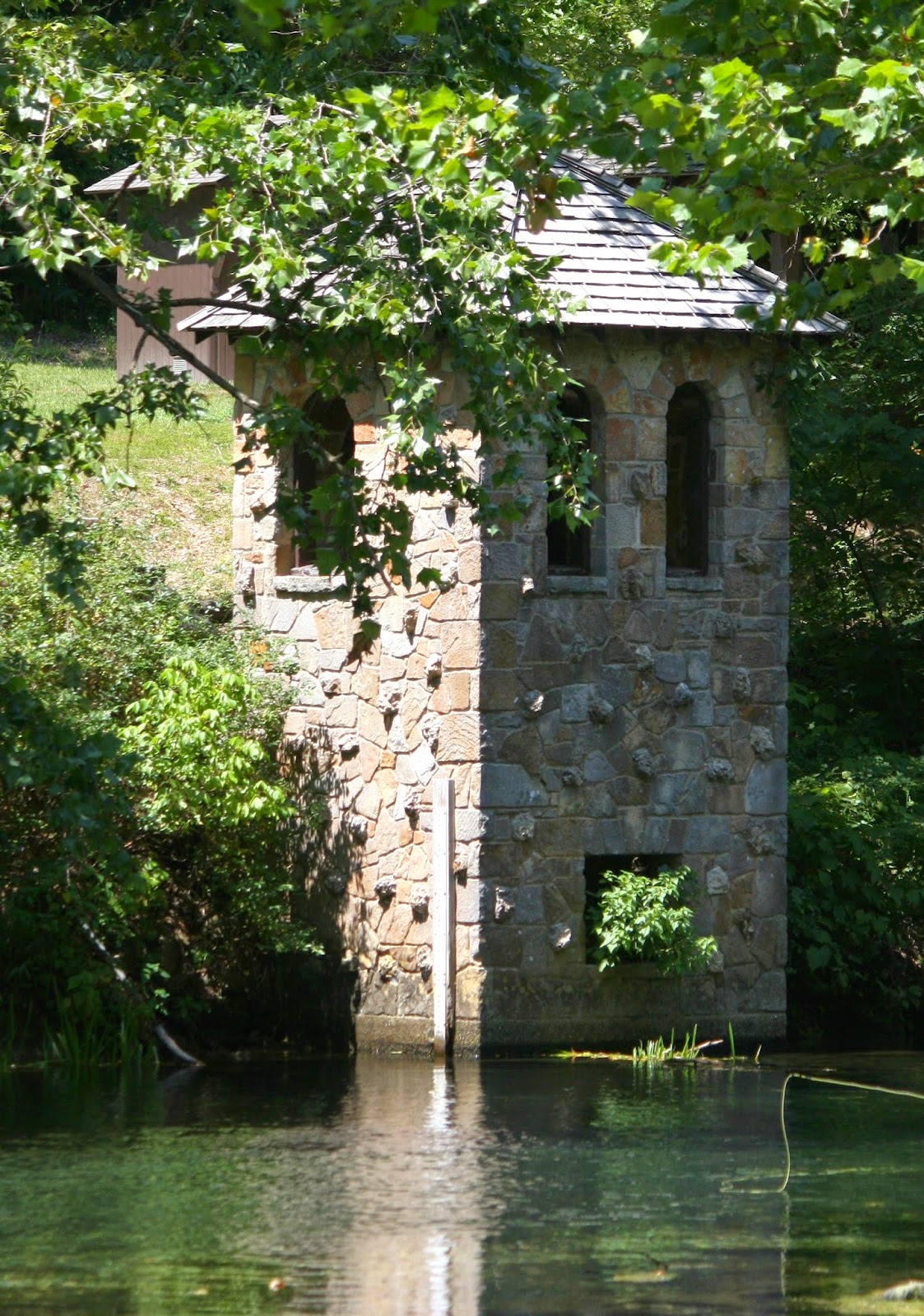 The park is full of rock spillways and dams and bridges. It is a very scenic park to be in. Everywhere you turn, you will find fishermen trying to catch a trout.

The water is crystal clear and while the fish may not bite your hook, it is a source of great frustration to the fisherman that they can see the fish they are so badly wanting to catch but at last are not biting! 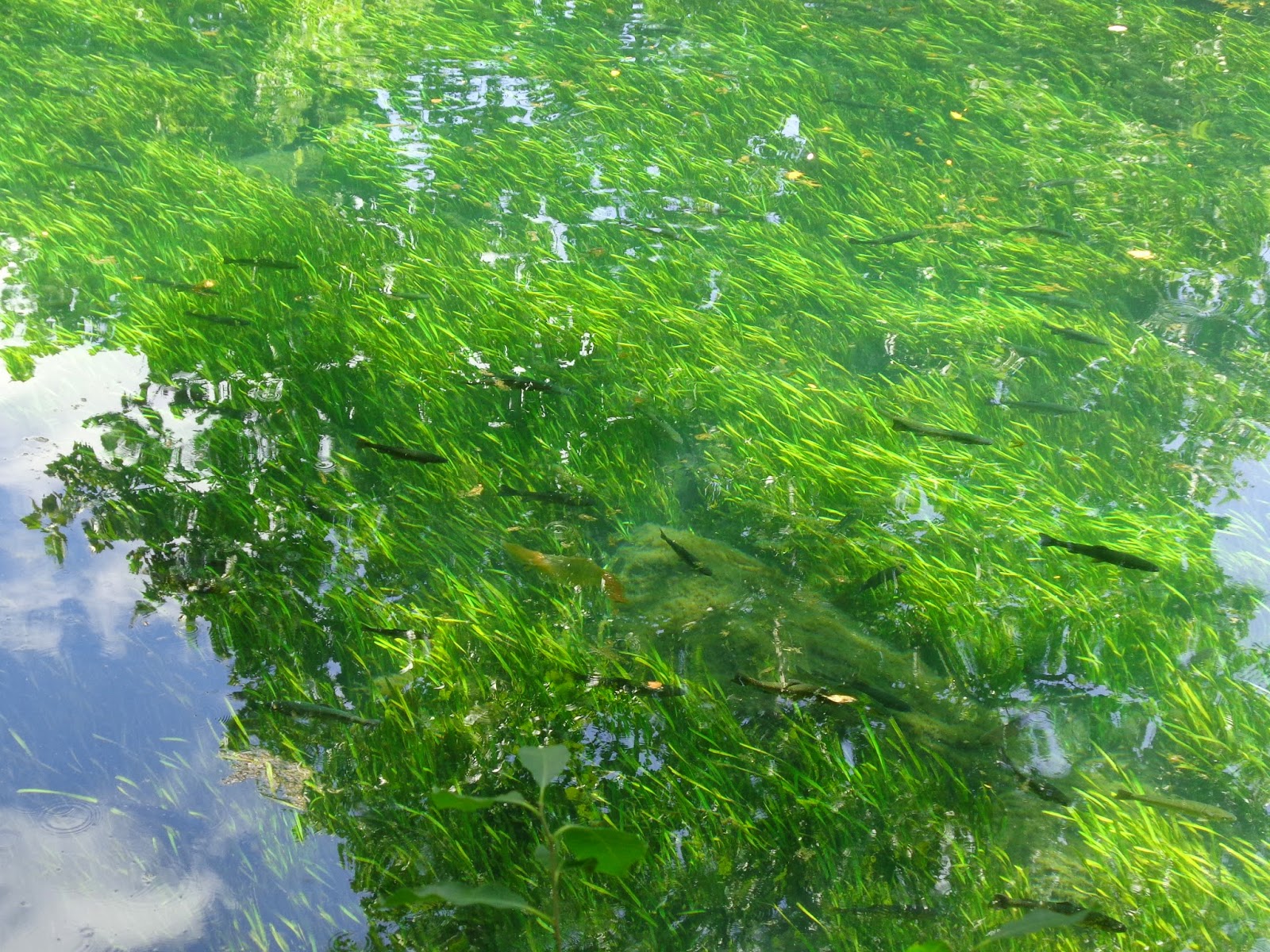 Bennett Spring State Park also has a fish hatchery. They raise baby trout and release them every day. The girls love feeding the fish on our visits. 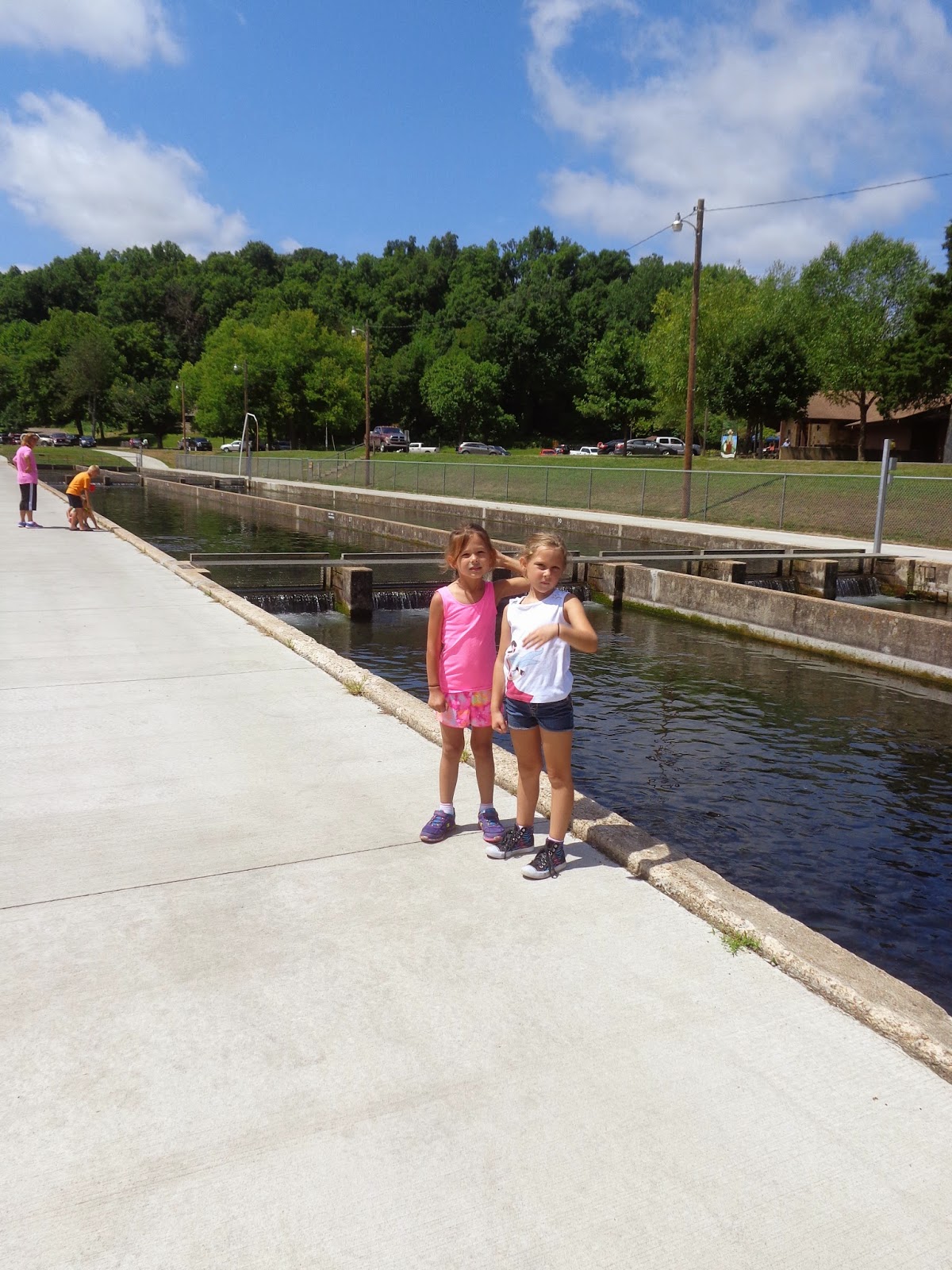 After three full days of fishing, the end of the weekend is near.  It comes time to rest and relax. Maybe the writing was on the asphalt all along!

The party sign caught a lot of attention at the state park campground! Even the camp host and park rangers stopped by to check on us. ( I should also say they came back later to praise our fish cooking skills!) 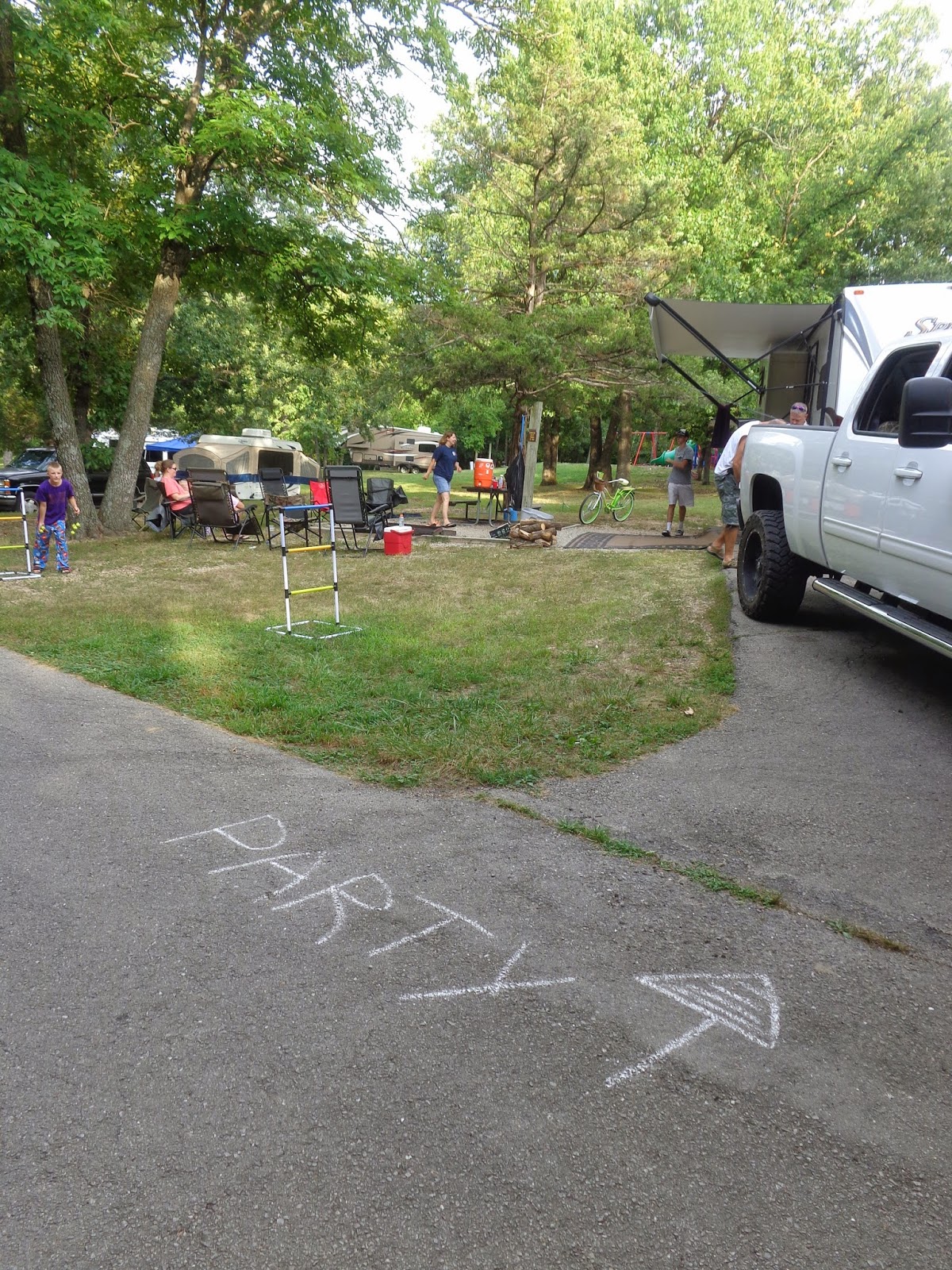 The party is really about frying up the mess of fish the group caught collectively.  It is also about telling fishing stories. Talking about how hard it is to catch that first fish after you start. Or what bait the fish responded to the best.  Mostly it is about having a good time on a Saturday night before you have to pack up and head home in the morning! 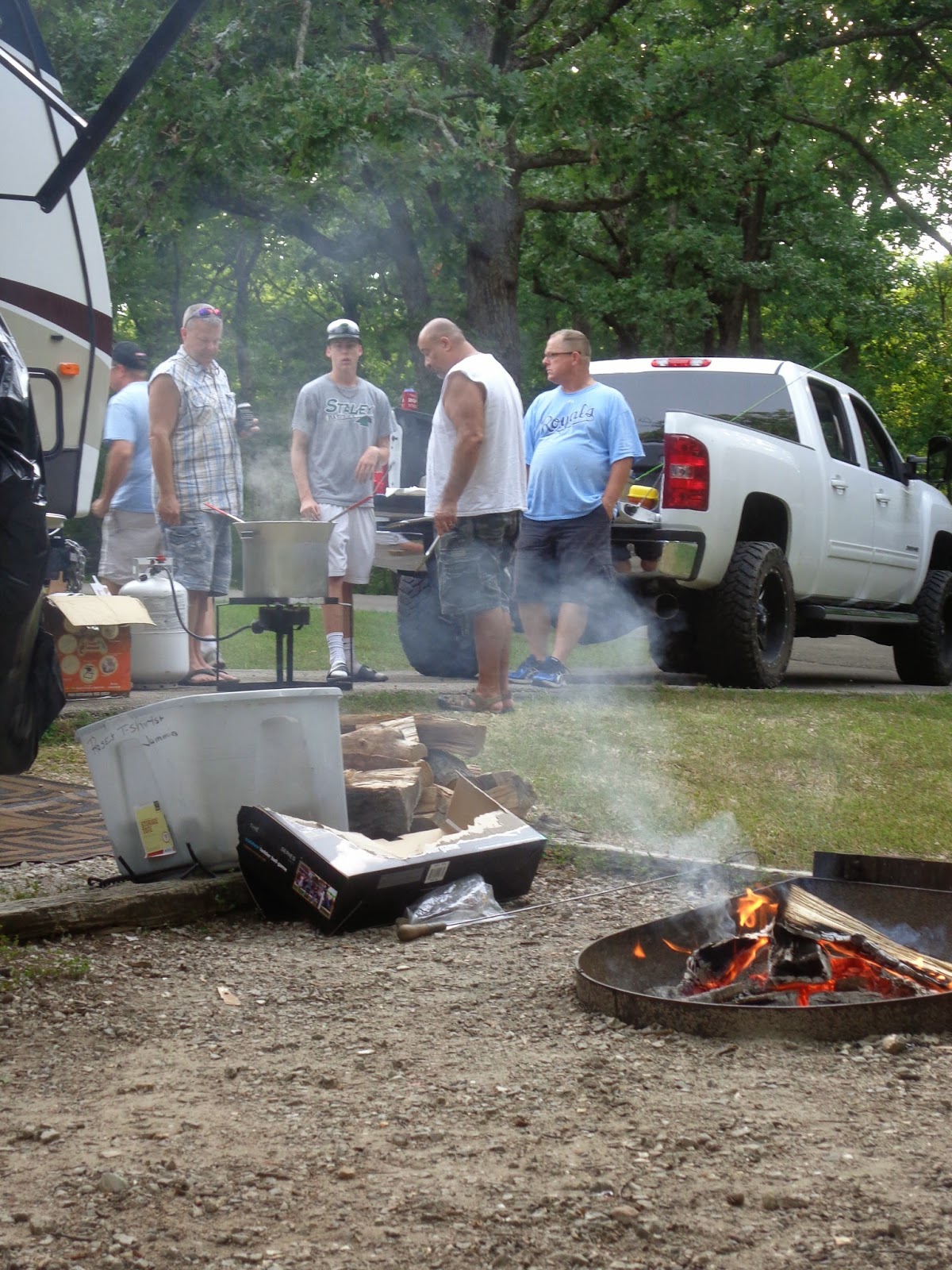 After dinner comes the adult time. Don't let the photo below fool you. The Boy maybe serving as bartender to the adults but that is where it stops. The Boy mixed up our "paint can" drink, which we women loved! We had a great time sipping on the paint can and playing Catch Phrase. 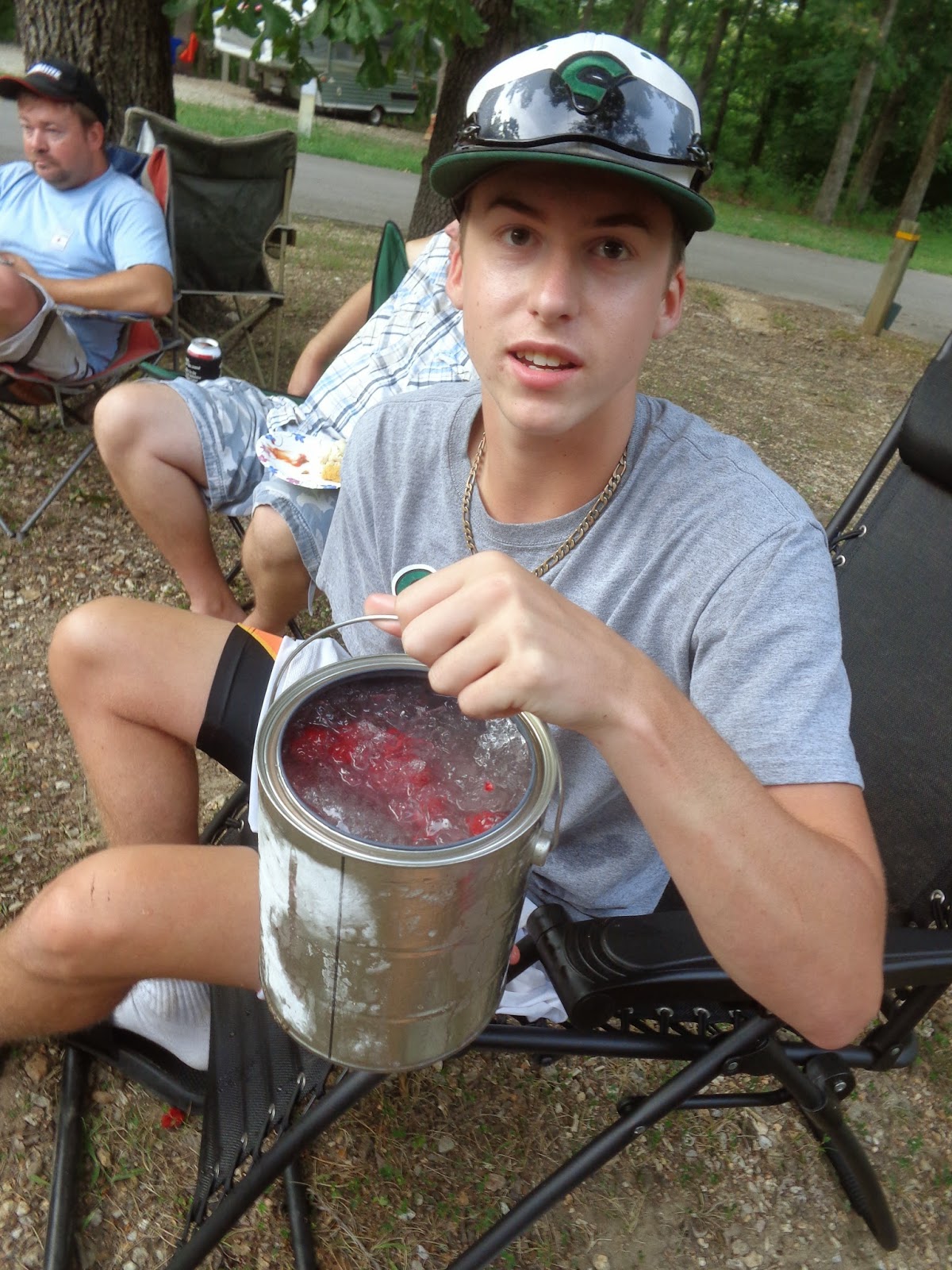 That night we had a bright full moon. On the way from the party camp-sight to our camp-sight the moon really caught my attention. I went in and grabbed my camera to take some photos of it. I am not sure this was the "super moon" we are expecting to see this year but it was worth visiting. 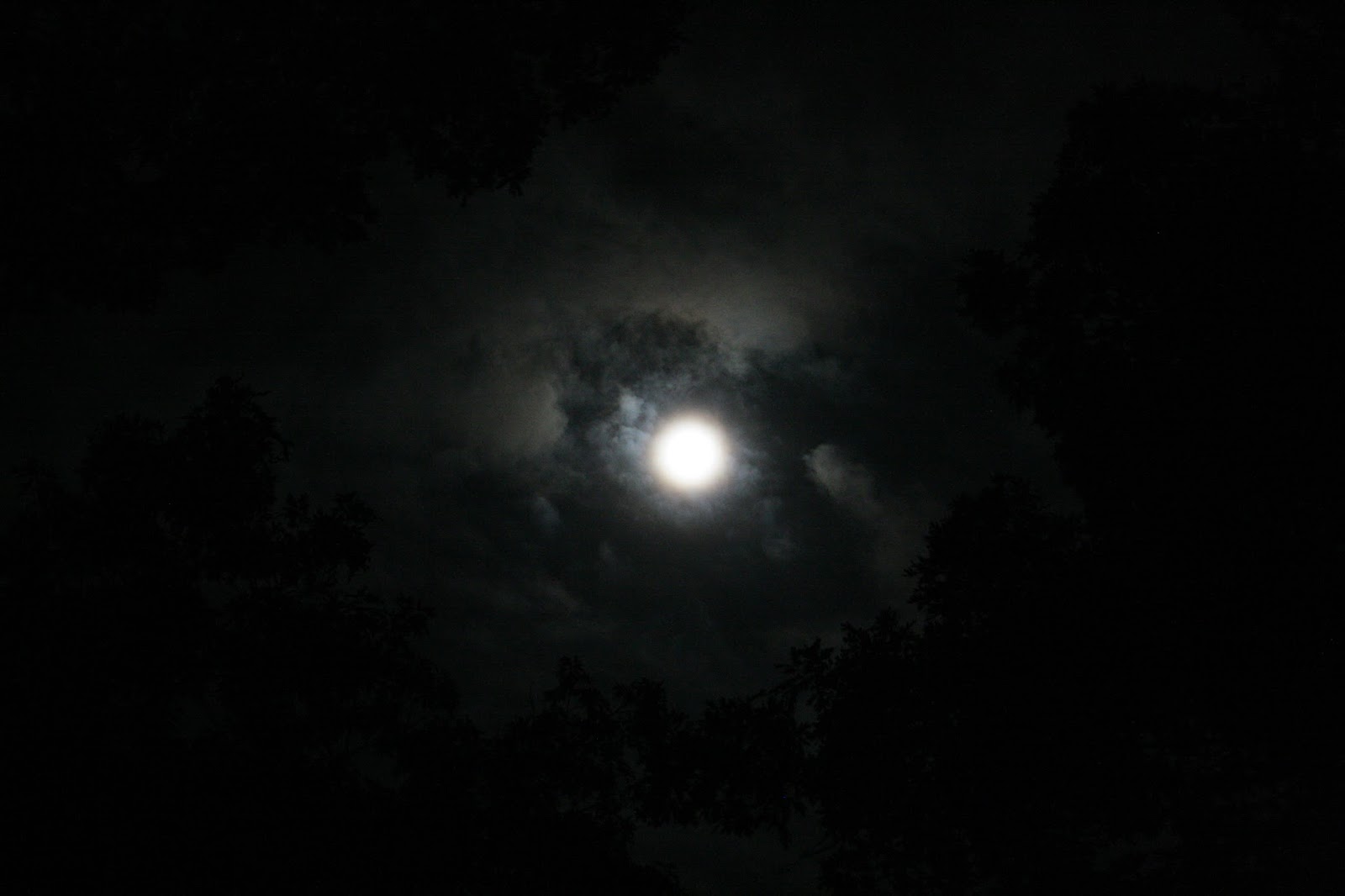 The next thing I knew, The Husband had come over to drag me out of the camper because he had something to show me. These yahoo's heard I was snapping photos of the moon and they wanted me to see another type of moon.... 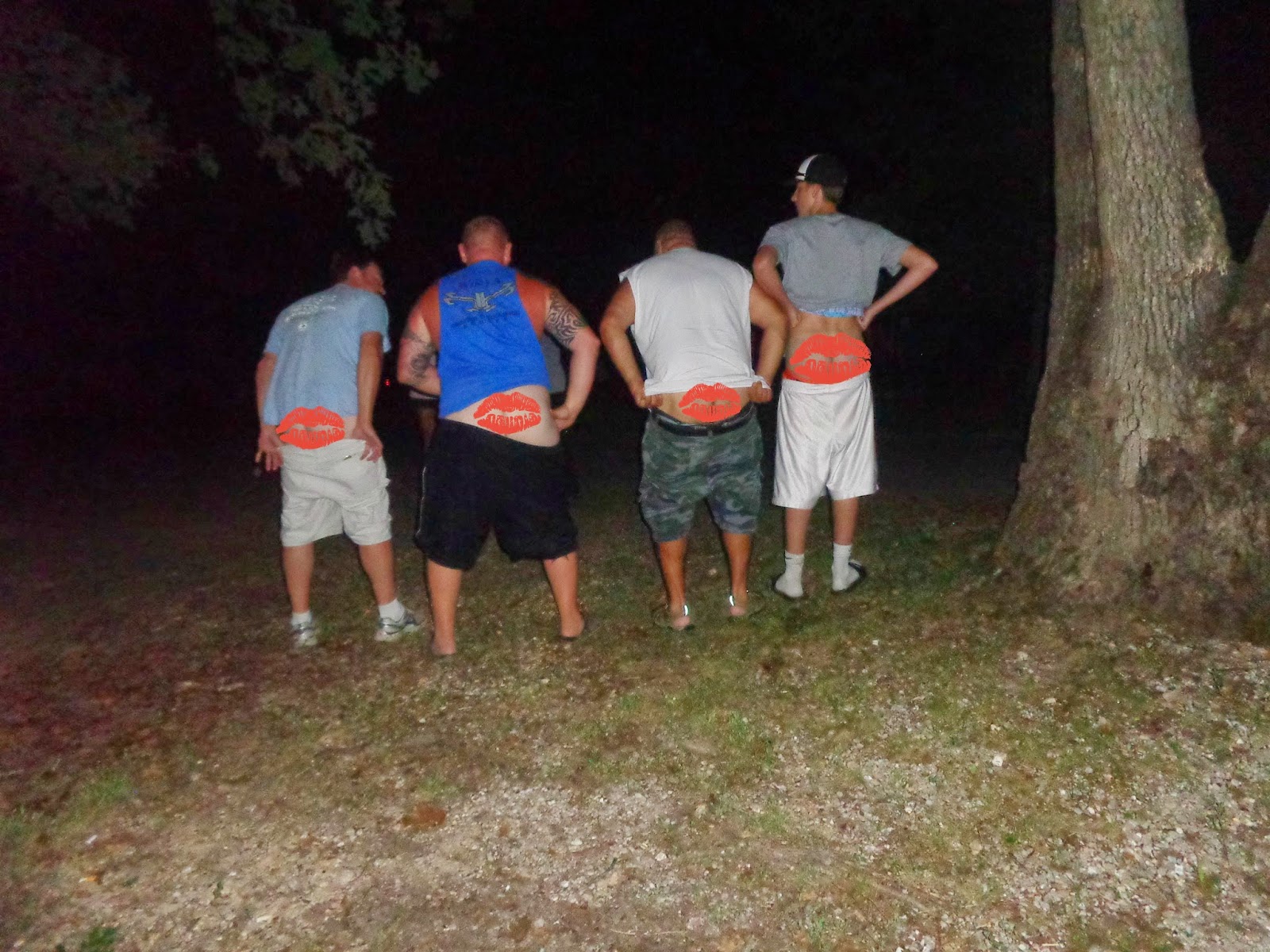 They ya have it! May the moon shine brightly for you tonight too!

Missouri Miles Completed: 146
State Parks visited this year: 7 (our 4th one to spend the night in)
Number of Super Moons witnessed this summer: 6 :-)