By Pamela January 18, 2016
Some time ago, I told you all that at the beginning of the school year, The Boy decided to pledge a fraternity.   The pledging process has been both a struggle and a blessing this semester. As a mom I have worried for hours concerned about his living situation, grades, partying, hazing, money and a rather large host of other things. From his perspective he has made some good friends and had a lot of support during this transition to college. 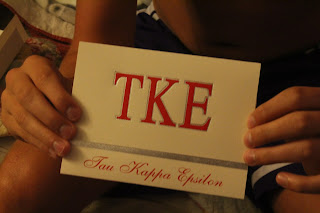 After a month home for Christmas break, The Boy returned back to college a week or so early so he could participate in Hell Week with his faternity. Never having been involved in Greek Life when I went to school, I am not sure exactly what Hell Week entails.  As a Mom, it does not sound like a thing you want your children participating in. Before he left I gave him my best Mom speech:
"Son, you know I was a GDI (Gosh Darn Independent) in college and it worked well for me."
"Son, you know you do not have to do anything that makes you feel uncomfortable."
"Son, if they ask you to do something that you feel is not a good idea, it is okay to walk away."
"Son, I would rather you walk away and come home than not be able to walk away."

It is probably obvious to all of you that I have watched too many TV movies on Lifetime and that I need a psychiatrist. But in my defense, I am just a Mom who worries about her kids.

He left a week ago. He promptly sent a text to his father and I and told us he would be completely unavailable by phone for a week and provided an emergency contact number. My heart sank to the bottom of my belly. Every night for this past week I have worried about him. I have missed hearing his voice. Every worst case scenario has run through my head: alcohol poisoning, broken bones, exposure, even branding crossed my mind!  Every single day all week long. 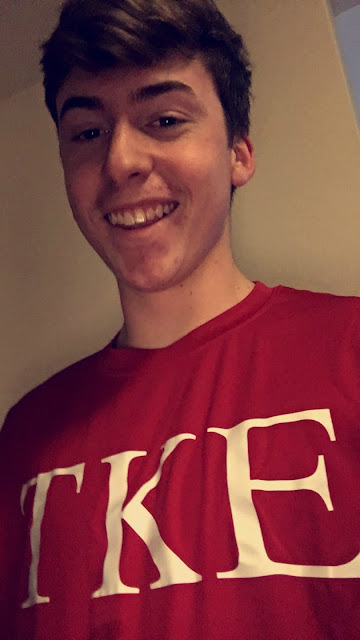 Then six days later, I woke to text message letting me know that he had made it. He called right after that and assured me he was very safe and extremely happy. He also told me never once was he physically hurt. He was initiated this past weekend into Tau Kappa Epsilon Fraternity.

I am  not sure as a Mom I can stop worrying. That just maybe in my genetic make up. I can be happy for him. He has already shown so much maturity that it melts my heart and gives me some strength to keep letting him go. He has shown commitment to something he wanted. He has advocated for himself, for others, and he even did some negotiating,  So yes, we both survived hell week. Now, he wears Greek letters across his chest and I am six pounds lighter from the stress diet I have been under!