By Pamela July 31, 2014
The Short Chic came down with a pretty nasty case of strep throat back in April. So, when The Boy started complaining about his throat hurting about 12 days later, I was pretty confident that he had inherited his sister's strep. Instead, The Boy was diagnosed with a peritonsillar abscess growing on his right tonsil.

We had to immediately see an ENT Physician who took a needle and drained the abscess. He removed about 5.5 cc of puss from The Boys throat.and then told us that once you have a peritonsillar abscess you were high risk to keep getting them. The Boy's tonsils were now compromised and needed to be removed.

We were told to plan for a two week recovery so we worked a surgery into our summer plans. Between family vacations, summer sports, and the beginning of school The Boy had his second surgery. A tonsillectomy. 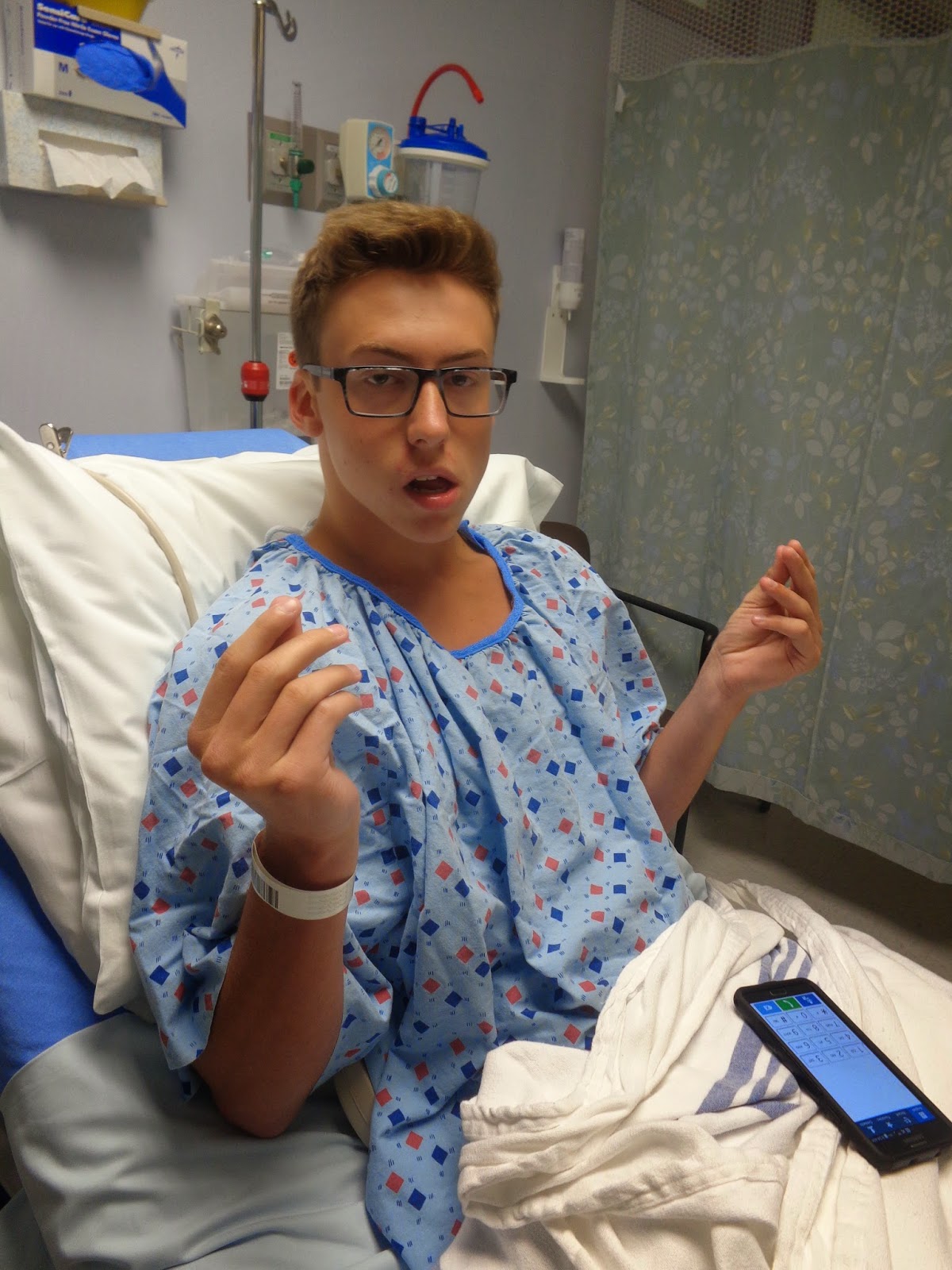 Pre-surgery prepping went well. It must be nice to be young and have healthy veins for an IV! The Boy had lots of pre-surgery visitors. My mother came down. My in-laws came to visit. As well as both Mom and Dad were there for The Boy during surgery. We all passed the time waiting for our turn in the operating room. 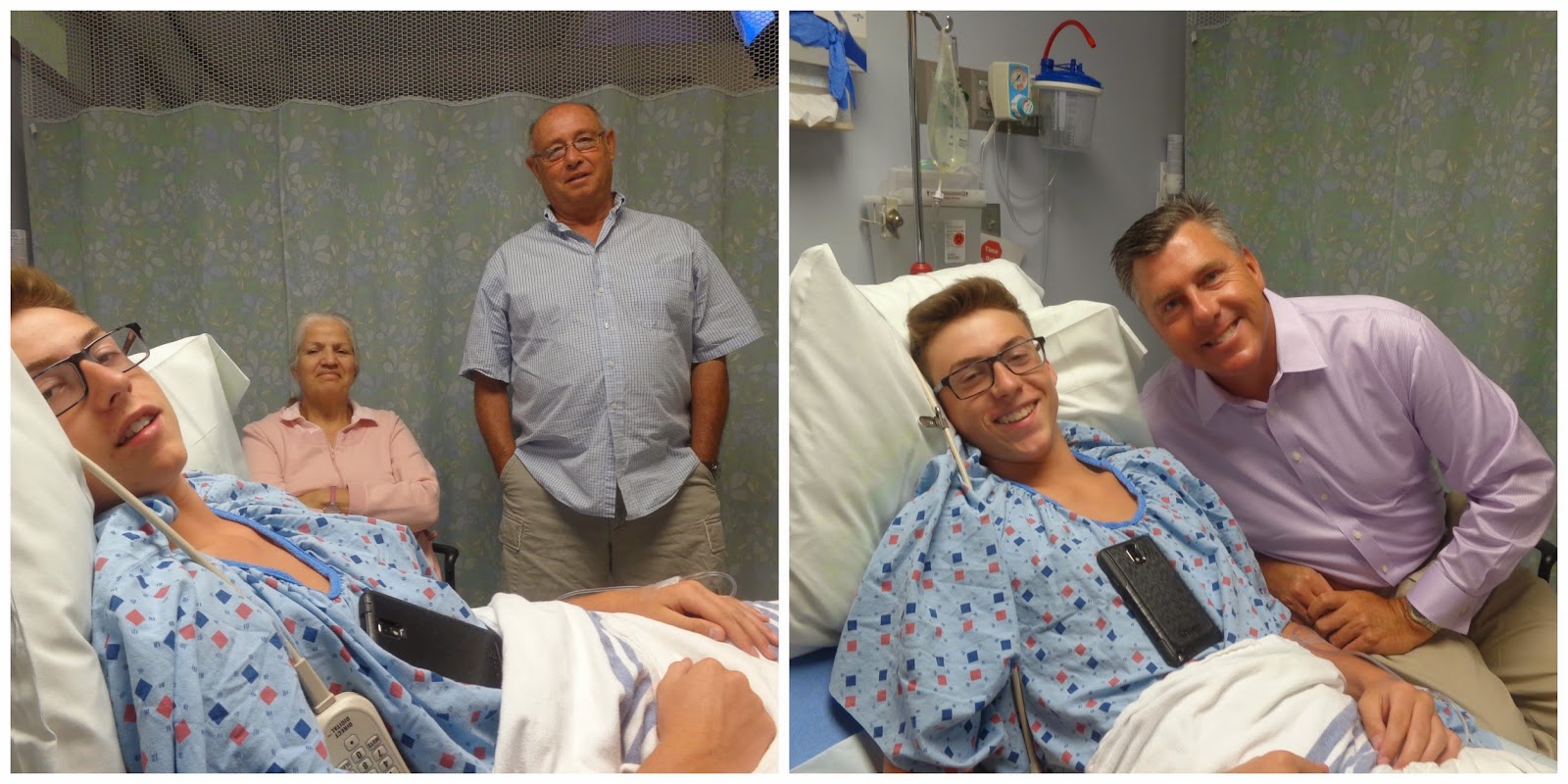 The ENT Physician told us post surgery that all went well.  He said that The Boy actually had another abscess growing in his left tonsil and it was just a matter of time before it became a problem like the right tonsil.

Our post surgery  instructions were pretty simple: avoid milk products for one day, soft foods only, eat what feels okay on the throat, and no physical exercise for two weeks. I attempted to make fancy cold soups for him. He hated the cold corn and shrimp soup but loved the Disney World Cold Strawberry Soup. He found that Jello felt the best on his throat.

Below are photos of the healing process. The Boy was in very little pain on Day 1. The hardest part was reminding him to eat soft foods. The area where the tonsils use to be were yellow from the medicine the doctor put on his throat to control bleeding.   By Day Three, scabs were forming and the yellow was turning dark. The whole area just looked thick.

In the second week post surgery everything looked to be thinning out. His largest risk was pulling a scab off with food, increasing the likelihood of bleeding.

We got lucky, there was no bleeding. He was in a significant amount of pain but overall I think he handled this well. He did manage to lose about six pounds.  We were suppose to have our post surgery follow up appointment today with the ENT Physician but they had to cancel due to an emergency. We will now wait another three weeks.

Hopefully, The Boy can enjoy his last two weeks of summer before he starts his senior year of high school.

By Pamela August 17, 2014
I have seen a few of these around campsites and I knew I would like to have one. The only problem that I had is The Husband. He already thinks we drag too much stuff with us when we go camping and if I had told him my desire to have a PVC Camping Light Pole he would have shut it down quickly! So, that leaves a girl with only one choice: Figure out how to do it by herself. I did some internet searching and found a few road maps on RV forums. They seemed easy enough! I visited the local hardware store for the supplies: An exterior post lantern light 2 inch PVC pipe (I used 5 feet but had to purchase a 10 foot piece) A 3 inch toilet flange A 3 inch to 2 inch Reducer PVC Glue A 12 foot electric cord kit 2 - 3/4 inch PVC Caps I also used a few supplies we already had on hand: White Spray Paint 3 1/2 foot - 3/4 inch PVC Pipe Drill Bits (1 inch and 1/2 inch) Tent Stakes The first step was preparing the lantern light. I could only find black i
22 comments
Read more

By Pamela July 25, 2013
Today is an anniversary date. One of those dates you wish you did not have to remember but there is no way you can forget.  Fifteen years ago today,two days after his birthday, my father died of lung cancer. He was a lifelong smoker and his cancer was aggressive. His battle was short. He fought for six short months after his diagnosis. He knew the chemo was not working and that his time was limited. When he came to this realization he became the best dad in the world.                                                In the days before my father's passing, my family shared some memorable moments. One of those moments centers around the deli meat: Liver Cheese.I would not be surprised if you have never heard of it, or even never tasted it. But I was raised on it as it was one of my Dad's favorite things.  What is it? Well, it is a German food that is actually called Leberkase. It is bacon, corned beef, pork, and onion that is ground together and baked. It comes with a
9 comments
Read more