I Found Myself A Cheerleader

By Pamela October 19, 2015
One of my favorite questions to ask young children is "What do you want to be when they grow up?" Their responses are so honest, simple and telling. When The Short Chic was little she wanted to be three things when she grew up, "A fisher-girl, a cheerleader, and a pilot." I still giggle at her selection.

Multiple events lead us to providing The Short Chic with an opportunity to be a cheerleader this fall. One of those was The Boy leaving for college. I needed a distraction from how much I missed him and since cheer required a three day a week commitment, it sounded about perfect.  We selected a competitive football league that also has a strong cheer component. Our chosen team has ten different youth football divisions ranging from K-2 flag football though 8th Grade Tackle. The Short Chic is a flag cheerleader.

We have been pretty impressed with the organization and structure of the team we have selected, The Northland Chiefs. We have practiced twice a week since the beginning of August and have had games every Saturday this fall.  Watching our child gain mastery over new skills is really a a proud parenting moment for The Husband and I. Our last game is nearing and then we will hopefully find ourselves playing in some post season play. 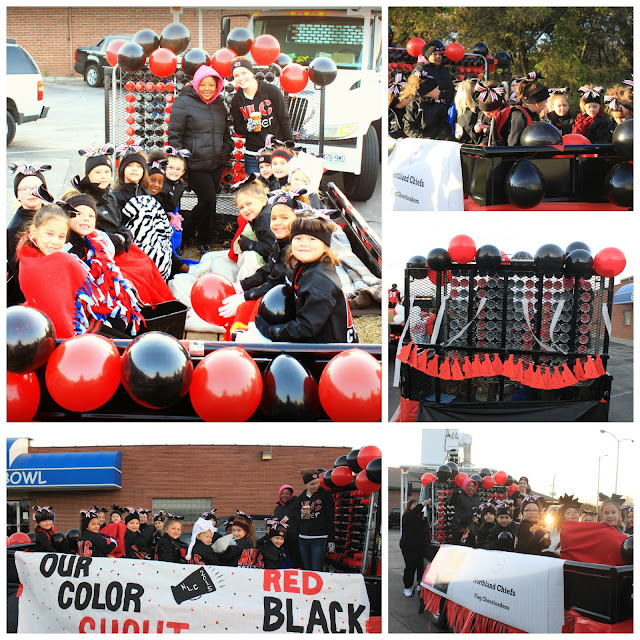 This past weekend was The Northland Chiefs homecoming game. Being newbies to this process, The Husband and I learned quickly how big a production homecoming is to this team. The organizers really want the kids to be honored for their hard work and feel special on this day!


We started our day out at 6:45 a.m. with a homecoming parade. Each football team and cheer squad had a float in the parade. The Husband volunteered us to pull a trailer in the parade. It was forecasted to be below 40 degrees the morning of our parade but thankfully Mother Nature was nice to us and it was not that cold.

We were told that someone would be decorating the float for us but we went ahead and made some simple decorations. A piece of fencing became a black and red "NLC" sign made out of solo cups. We also purchased inexpensive plastic table cloths from the dollar store and cut them to create a fringe skirting around the trailer. I wanted to make a PVC Goal Post or do a balloon arch but The Husband enforced some editing and said no. It all worked out because the volunteer for decoration brought balloons and an awesome paper banner.

We followed a six or so mile parade route to our home field with parents, grandparents, aunts, uncles, and even siblings lining the route. Normally when you are in a parade you throw candy out to the parade watchers. In this parade, several parade watchers threw candy at the football players and cheerleaders in the parade. 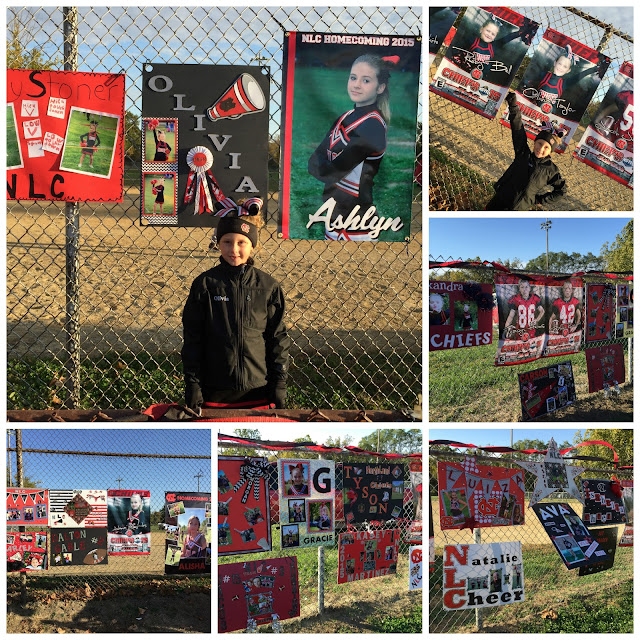 Once we arrived at the park, the entire entryway to the football field was lined with cheer posters for every player and cheerleader. Many veteran parents had warned me about making a homemade poster. They said, "the wind rips them apart," "the rain destroys them." I was advised to purchase a vinyl poster that would with stand the unpredictable fall weather. So, I did. Then the crafty DIY'er in me  screamed in revolt! So I added the stress of a homemade cheer poster to my pre-homecoming schedule. Thankfully for this newbie mom, the fall weather was perfect and in the end, The Short Chic had two posters. One professionally done and one crafted with love by her mom.

The kids loved the posters. All day I would see kids looking at their posters, taking time to find their friends or teammates.  Even the parents had a great time checking out all the cheer/fan posters. 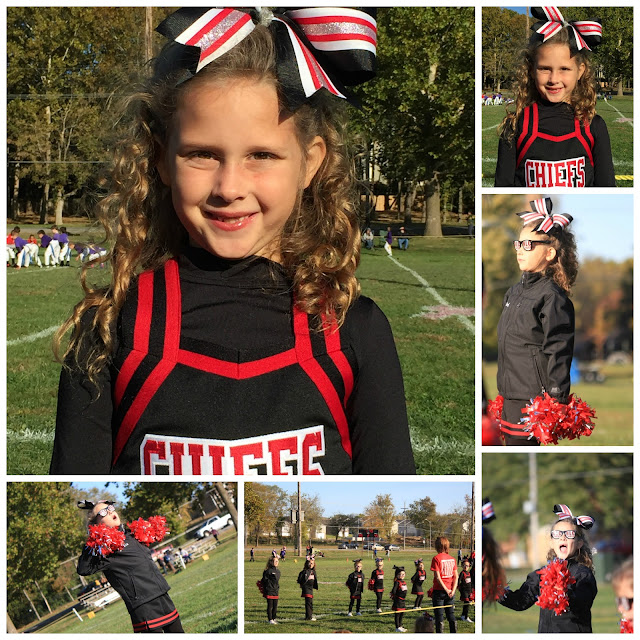 The organization is heavily dependent upon volunteers. The Husband has volunteered to be a part of the chain game several weeks. He has also made his "world famous" sausage gravy to be served at early morning games. He even volunteered me to make breakfast burritos.  This en-devour has been a positive experience for us and The Short Chic. We have found ourselves a cheerleader. She has fulfilled a dream.

Homecoming came and went. It was a long, exhausting day. All that remains are the memories.  Oh, and the photo booth film strip. We have that to make us laugh for some time! 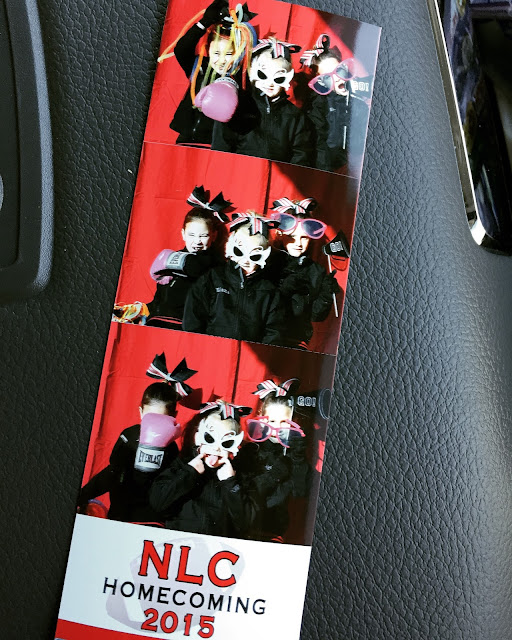