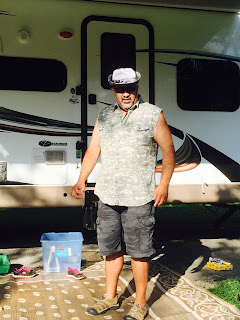 It has become somewhat of a tradition to go camping over Father's Day Weekend. This year we traveled but stayed close to home. We visited Crowder State Park in Trenton, Missouri about one and half hours north of Kansas City. On Father's Day Weekend, the men folk get to decide our menu and get to sit around like kings. We also look the other way when they make questionable fashion choices. The Husband decided it was okay to wear three different types of camo at the same time!

Crowder State Park is a short ten minutes east of Jamesport, Missouri which is home to an Amish community. After breakfast on Saturday, we drove over and enjoyed shopping in the Amish stores: giant cinnamon rolls, horse drawn carriages, preserved fruits and vegetables, and who can resist sleeping kittens. 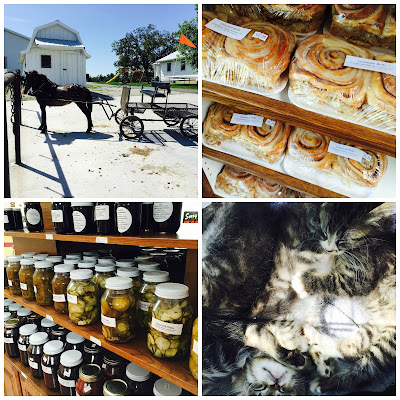 In addition to the Amish stores, we also visited many local antique stores. I have been looking for a vintage fly fishing rod for a while and I am happy to say I found one.I have not done anything with it but I am looking to sharing my find with you all a bit later. We finished our time in Jamesport having lunch at my favorite local place. The Husband and I shared a pork tenderloin as well as a piece of blackberry cobbler.

Normally, we spend a lot of time exploring the state park we are staying in. However, by the time we returned to the park after exploring Jamesport it was hot! Instead of hiking a trail, we decided to hunker down in the air conditioning and nap.

After napping, we were visited at the campsite by several of my extended family members. The sun set and the heat declined. The reunion lasted all evening until the threat of storm rushed everyone home. We cleaned up the campsite and prepared for an evening of wind and rain.

As the storms continued to threaten us Sunday morning we packed up and headed home very early.  We enjoyed our short time at Crowder State Park even though we did not explore much. 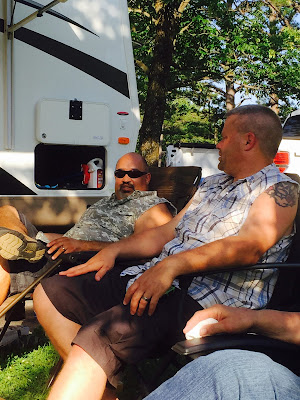