Miley tweeted this message the night she got sick: 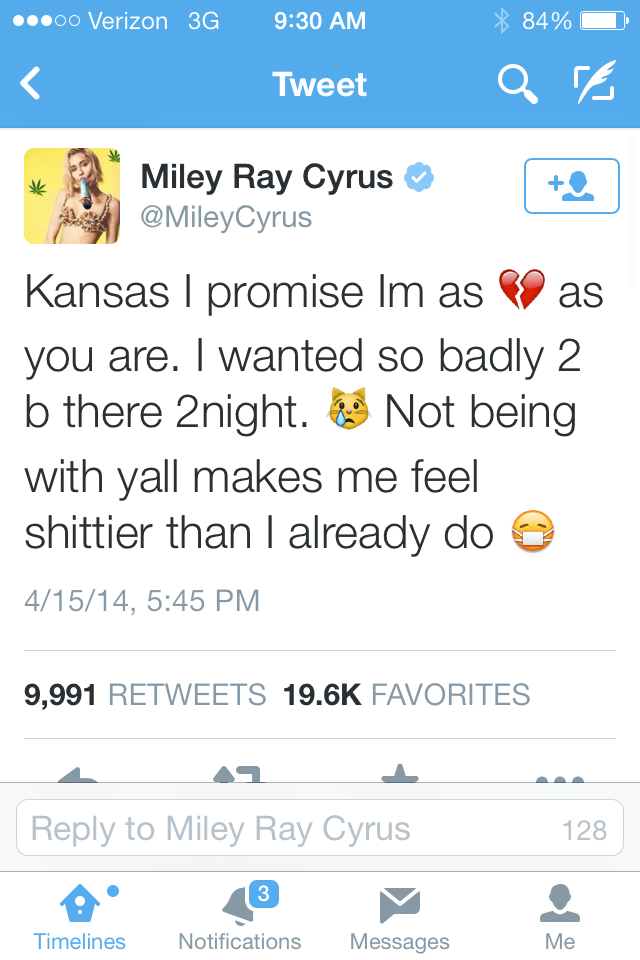 As soon as I saw it, I heard the nails dragging down the chalkboard. Really? Once again, a celebrity shows their complete and utter lack of knowledge about Midwestern geography.

I recognize that it is not just celebrities. Almost every visiting sports team references how they are going to "beat Kansas!" I attended a football game in Denver many years ago. The Denver Bronco's were playing The Kansas City Chiefs. A fan stood up and hollered out, "Go back to Kansas!"

Even my beloved Miss Medical Student asked, "What is there to do in Kansas?" when she was about to visit us for the first time.

Let me just break it down: Rock group Puddle of Mud and Rapper Tech N9ne started here. Thomas Hart Benton. Even Walt Disney lived in Kansas City, Missouri as a young child. Kansas City host the American Royal Barbecue and Livestock show every year.  You can visit the Negro League Hall of Fame or the Liberty Memorial - The National War World I Museum. The Kansas City Chiefs as well as the Kansas City Royal. They are all Kansas City, Missouri. Not Kansas.

I guess part of the misconception is that other states who have a city named after their state are actually located in their state. The way New York City is in New York. Or Oklahoma City. It must be unfathomable that the Kansas City everyone reference is in Missouri not Kansas.

There is an outdoor amphitheater in Kansas. When I was a young person I attended a lot of concerts there. It would be more than appropriate to address the crowd with a "Hello, Kansas!"  But the same greeting given at the Sprint Center in the heart of The Power and Light District would not be appropriate.

When Miley tweets out an apology to Kansas when she was scheduled to play in Missouri, it is most likely offending her fans.I do have to wonder do fact checkers and public relations managers still exist?  I get that Miley is a performer and waking up in a different city each night is hard but is it too much to think that a personal assistant would educate her on where she is at and how to greet her fans?